Some Hon. Members: Michael Cooper, keeping the ‘What the Christ?’ in Christchurch 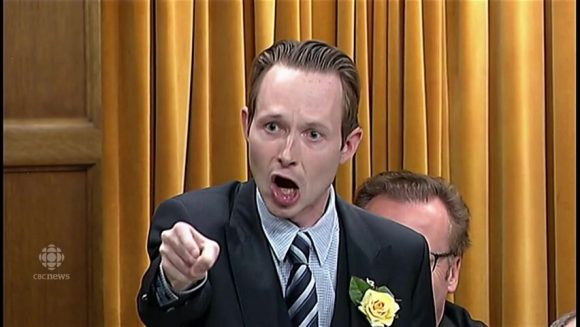 So it’s down the memory hole for pindicked theocon Michael Cooper. The Conservative junior justice critic’s bonkers May 28 committee performance, topped with a sour cherry picked from the Christchurch mosque shooter’s “manifesto,” has been expunged from the public record (Tory justice committee members abstained from voting on the redaction). In the interests of preserving the honourable member’s deep thoughts for posterity, that foam-flecker in full:

Michael Cooper (Con. Edmonton-St. Albert): Thank you Mr. Chair. First of all, Mr. Suri, I take great umbrage with your defamatory comments to try to link conservatism with violent extremist attacks. They have no foundation, they’re defamatory, and they diminish your credibility as a witness. And let me, Mr. Chair, read into the record, ah, the statement of Brenton Terrant, who was responsible for the Christchurch massacre. He left a 74-page manifesto in which he stated “Conservatism is corporatism in disguise. I want no part of it. The nation with the closest political and social values to my own is the People’s Republic of China,” closed quote.

And I certainly wouldn’t attempt to link Bernie Sanders to the individual who shot up Republican members of Congress and nearly fatally killed [!] Congressman Scalise. You should be ashamed. Now, with respect, with respect–

Cooper: I have his speech in front of me, and there is nothing linking conservatism to that movement. If alt-right is limited to conservatism–

Housefather: Guys, guys, guys. We’re just gonna ask everyone who is not part of the committee to leave the room for a very brief period time, and we will have you come back in as soon as possible.

Housefather: I really apologize for taking away your time. It was important that the committee discuss and deal with the issue. I’m going to give the floor back to Mr. Cooper.

Cooper: Well thank you Mr. Chair, and while I certainly find the comments made by Mr. Suri to be deeply offensive and objectionable and vehemently disagree with them, I will withdraw saying that he should be ashamed. That is not unparliamentary, but I understand it made some of the members of the committee uncomfortable, so in the spirit of moving forward, withdraw those specific comments but certainly not the rest of what I said (that’s enough self-radicalized incels!!–ed.)

11 comments on “Some Hon. Members: Michael Cooper, keeping the ‘What the Christ?’ in Christchurch”