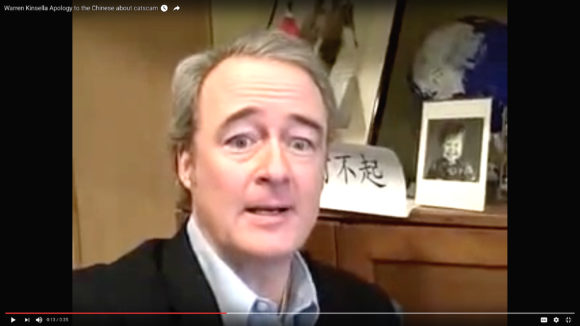 Oh, dear. It seems the rats have once again come home to roost for Warren Kinsella.

Maxime Bernier‘s threatened lawsuit against the Printh of Darkneth has indeed come to pass, landing with an ominous thunk at the Ottawa courthouse Monday. *See update below.

Frank followers will recall the Pipples’ Party supremo sent a notice of libel to the punk poseur in December, demanding the deletion of defamatory blog posts and tweets portraying him as (pas possible!!) a racist, homophobe, white supremacist, etc. Some of these were posted during “Project Cactus,” Kinsella’s paid campaign to shiv Bernier on behalf of the Conservatives.

But instead of bending the knee, Warren offered a middle finger, calling Max’s bluff — which wasn’t.

Bernier is now demanding $250,000 in general damages and $75,000 in punitive/aggravated damages, a court order to take down the offending material and another permanently restraining Kinsella from talking anymore shit.

He’s also seeking to stick Wornout with his costs on an all-you-can-eat substantial indemnity basis, and the meter is already running at a clip, thanks to legalist André Marin (Lister Beaupre), the former Ontario ombudsmidget and longtime Kinsella antagonist. Also on the file are the firm’s managing partner, Andrew Lister, and third kazoo Michael Babe.

“Coincidentally or not, the [CPC] Retainer to smear Maxime seems to have aligned with Kinsella’s own partisan leanings. At the material times, therefore, Kinsella was performing paid partisan attacks as the agent, principal, directing mind, office and/or director of the Daisy Group entities.”

The Conservative Party of Canada has not been added as a defendant, although the details of their contract with Warren/Daisy will doubtless be thoroughly chewed over in discovery and at trial. The sick burns Bernier complains of leave very much open the question of how much value the Tories got for their ratfucking buck. A sampling:

“a. On or about February 23, 2019, 2019 [sic] Kinsella posted a blog entitled ‘Is MaximeBernier a racist?’ to the War Room, in which Kinsella stated that ‘Max Bernier — because of the words he chooses, and those with whom he chooses to associate himself — is now indisputably piloting the same dark waters charted by the likes of Donald Trump and David Duke’; 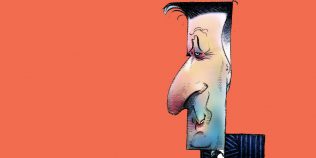 Kinsella further stated that Bernier ‘is a telegenic bigot who panders to the worst in people’ and that ‘[b]y his words, and by his deeds, we all know who Maxime Bernier is’;

“d. On or about June 4, 2019, Kinsella posted a blog entitled ‘Actually, Maxime, there is only one federal party leader who sounds like a white supremacist who hates women’:

“f. On or about July 29, 2019, Kinsella posted a blog article entitled ‘Bernier and his infamous neo-Nazi friend’ to the War Room, in which Kinsella misleadingly and deliberately posted a photograph showing Maxime at an election campaign event. The campaign event in question took place in a hotel lobby, where Maxime greeted and posed for pictures with dozens or hundreds of attendees. The other individual in the photograph is apparently Paul Fromm, a white supremacist. Maxime had never met this individual before, and did not know his identity when the picture was taken. 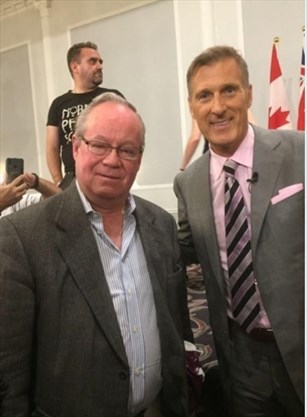 Paul and Max, in context

“Kinsella deliberately and misleadingly stated in the blog post that Maxime was friends with a neo-Nazi. As a person steeped in political campaigns, Kinsella is well aware of the true context of the photograph, and chose instead to deliberately misstate what the photograph depicts.

“In the same blog post, Kinsella stated that Maxime is ‘the leader of the alt-right White People’s Party’,and ‘fully crossed the Rubicon…Consorting with the undisputed leader of Canada’s white supremacist movement…In his words and in his deeds, Maxime Bernier has shown us who he is. We need to start believing him.’;

“k. On or about September 9, 2019, Kinsella replied to a Twitter post by Maxime. In his reply, Kinsella stated the following: ‘Piss off, you racist jackass. #elxn43 #cdnpoli;’

“l. On or about October 7, 2019, Kinsella posted the following message on Twitter: ‘Everyone, be sure to check out Bernier’s post-debate cross-burning party!’;

“n. On or about October 25, 2019, in a podcast episode entitled ‘Kinsellacast 85’ posted to the War Room, Kinsella stated that ‘research conducted by B’nai Brith of Canada, the Canada Anti-Hate Network, and others shows beyond a doubt that Bernier is the de-facto leader of Canada’s Alt-Right movement. He’s David Duke North.’ 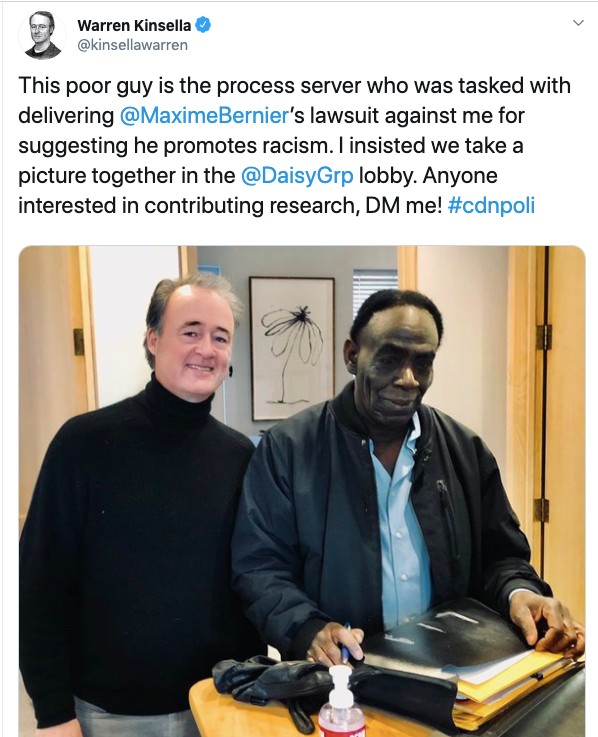