Hark! Is that another Rebel Media fundraising kneebender I see before me? From the same tireless moochers that brought you “Help Rebel News Through the Pandemic!”  “Help Rebel News Investigate Illegal Immigration!” and “Investigate Greta!” comes the the latest fill-in-the-wanks begathon, “Help Fight The Fines!”

This time they’re passing the hood for the legal defence of those unjustly fined for social-distancing violations.

Ezra’s partner in the fund was Wells Asset, located in the heart of the financial district in Lloydminster, Alberta. Alas, the provincial Securities Commission last summer suspended the company’s registrations. Something about non-compliance with securities laws.

Never mind. There’s more where that came from. Remember how Ezra raised $15,000 for military families at CFB Borden, Christmas, 2017?

Whoops! The Rebel brand was so radioactive that military brass in Ottawa ordered Borden to decline the cheque.

Doubtless, the scores of old-age pensioners who shelled out for that fundraiser were promptly reimbursed. (But we just don’t know. It is the Rebel, after all.)

Which brings us back to Ezra’s current crowdbilker, a legal defence fund to defend ordinary stupid people hassled by the police for doing ordinary stupid things in our public spaces during this socialist lockdown. “[It’s] an opportunity to correct this country’s wrongs, and to stand up for the little guy. The five cases we’ve accepted so far will surely cost us $25,000 — can you please help?”

Frank Prank
In response to Ezra’s call for tales of COVID-copper overreach, we invented a 77-year-old widow from Woodstock, Ont., by the name of “Florence Fletcher.”

Here’s the cockamamie story Florence emailed to Rebel in order to con Rebel’s ace journos. They leapt like trout. She had documents! 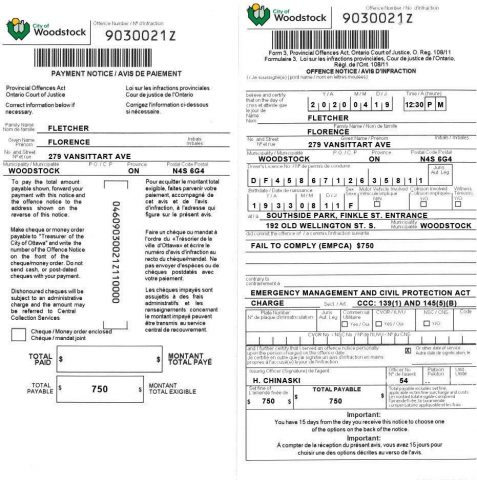 Last Sunday afternoon, I was leading my weekly rhythmic gymnastics class for seniors at Southside Park.

All of a sudden the police showed up and scared us half to death.

They told me our group was too large (there were only two of us!) and that we were swinging our ribbons too close to each other.

I am so upset that law enforcement would single me out for a $750 fine. I don’t have that kind of money.

But what was worse, the police got huffy with me because I demanded they do something about the Chinese family across the park. 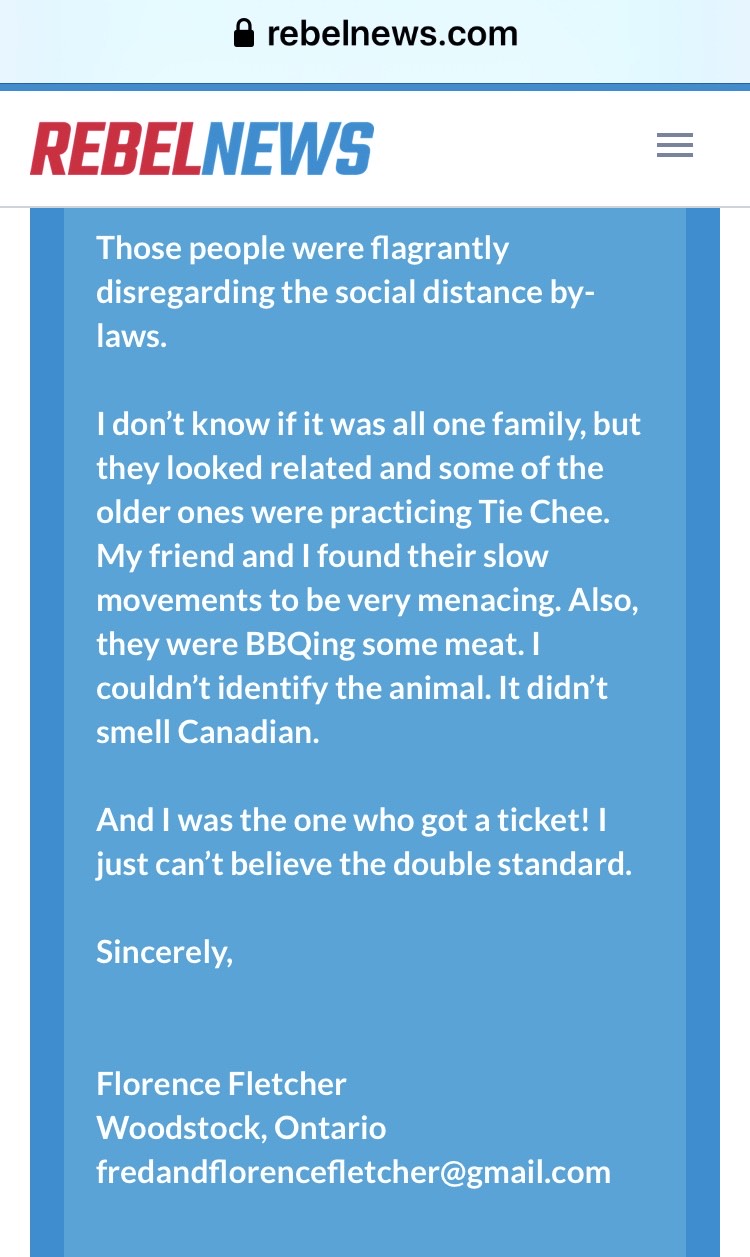 A few days later, Florence gets a call from Rebel legalist Sam Goldstein, the Toronto legalist who adorns his business cards with: “Have Trial. Will Wear Gloves.”

Florence: Hello Sam. My daughter saw you on Rebel TV and she says you are a very good lawyer.

Sam: Why, yes. Yes I am. You know that Rebel News has been advertising on their website for people who have been charged under the Emergency Act to contact them. And then they’ll send me…they’re paying me to represent people across Ontario.

F: So they pay you, so that’s why we don’t have to pay anything? I don’t have much money.

F: When you spoke to my daughter you said your fee would be $20 an hour, is that correct?

S: Yeah, I’m asking…if you can’t afford $20, I’ll take $10. But I just want you to know that there’s a legally binding contract between the two of us and that means, you know, there’s solicitor-client confidentiality and I take my directions from you…you just have to reply, “yes I want to hire you.”

S: Can you remind me what happened to you?

F: Yes, I’ll tell you all about it. Do you have a few minutes?

[Florence gives Sam a quick rehash of the ticket incident, then launches into her past history.] 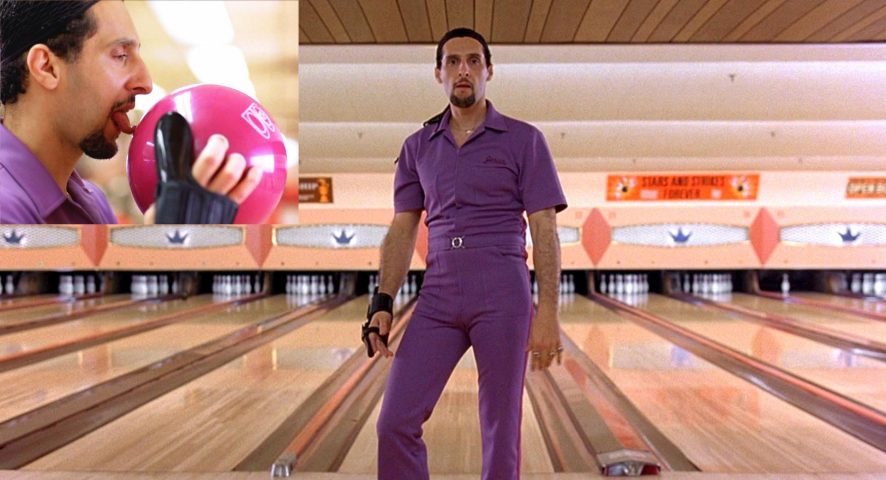 F: I used to make a very good living as a ‘parts model.’ I did a lot of close-up work on TV commercials. The other gals did legs or hands or lips, but I had the best feet in the business. My toes were a perfect 10.

But it all came to a bad end when I was doing a TV commercial in LA. Directed by Jésus Quintana…you know him? Famous for his bowling commercials.

I was modelling bowling shoes and someone dropped a ten-pin ball on my foot.

I had to quit the business. Heartbreaking. So now I live on a small disability insurance pension, in this frozen backwater, in a walk-up flat. And now with the virus, I’m alone at home. All I can afford to eat is cat food. Although, I must say, the Meow Mix sea bass is pretty good on Rye Vita.

I’m not a shit disturber, Sam, but– 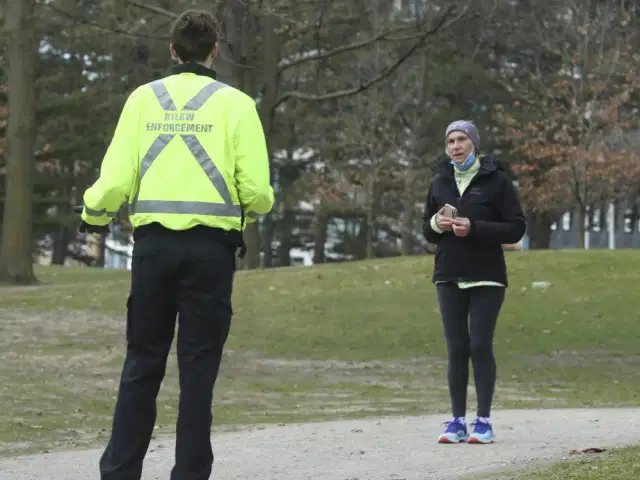 Bloody hell! And just as Florence was about to ask Sam if he might have a potential conflict of interest acting for both Rebel and her at the same time!

So we’ll ask for her:

Tell us Sam, which of your clients is best served:

“A lawyer shall not act or continue to act for a client where there is conflict of interest, except as permitted under the rules in this Section,” sayeth 3.4-1 of the Law Society of Ontario’s Rules of Professional Conduct.

-Why charge a minimum amount to Florence or any of the other cases Rebel has taken on? It’s not required;

-How does Rebel figure each case will cost $5,000 to defend? They’re heard in the Provincial Offences Court (which is currently closed, btw!) and they’re usually wrapped up in half an hour. $5K? (that’s enough questions!!–ed.)

2 comments on “Prank: Free the Southside Park Two! Frank and The Rebel waste each other’s time!”