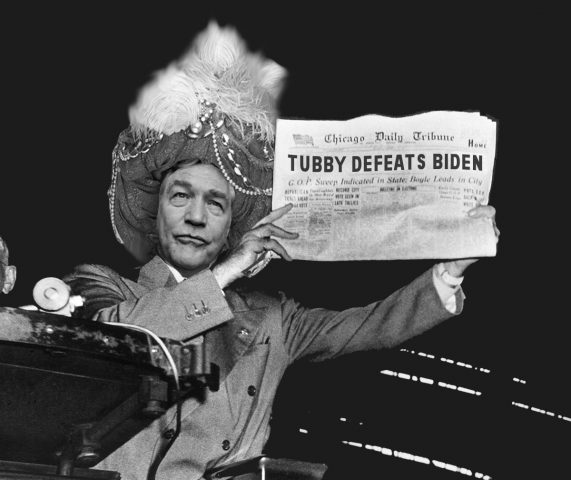 Still, you’ve got to admire his chutzpah…seemingly oblivious to the chortling all around, he churns out these little atrocities like a Guangdong bobblehead factory…he is the Florence Foster Jenkins of political pontificating….
—“OJM,” Frank reader comments, Aug. 6, 2020.

On the day, the people will endorse the administration. [A]fter what he has achieved in the past 19 months, the country will not desert this president, as Lincoln said, “in the middle of the stream.”
—nationalreview.com, Oct. 25, 2018.

The Democrats are now an almost completely dysfunctional party, in desperate need of a crushing defeat in 2020 to help them back to their senses. Barring a miracle of messianic reinvigoration from a now invisible source, that is what it shall receive.
—newenglishreview.org, Feb. 28, 2018.

If the Democrats go to the voters next year as the party of infanticide, open borders, a 70 percent top personal income tax rate, and the practical abolition of private health care, they will vanish more quickly, and with less distinction, than the Whigs…. This thronging riff-raff of Democratic presidential aspirants couldn’t lead the country across Washington’s Francis Scott Key Bridge, and won’t get an invitation to try.
—amgreatness.com, Feb. 9, 2019.

Most of the elements are now in place for a decisive electoral victory for the current president, and a clear mandate to drain the swamp of all that he ran against…. President Trump can turn a likely clear win into a mighty landslide. I believe he will do it.
—nationalreview.com, May 8, 2019.

The full proportions of the debacle that awaits the Democrats next fall is starting to penetrate their complacent disdain and revulsion toward President Trump.
—nationalreview.com, May 16, 2019.

“[A]s of now, it looks to me like Trump has done it carefully step by step—he’s taken chunks of the electorate, one after the other. He’s rising fairly steadily in the polls, and now he’s cracking the solidarity of the Democratic hold on the African American vote, and my impression is he’s going to pardon a great many people and say look, all these first-time, non-violent offenders have been over-sentences [sic], and I’m releasing them. I’m not pardoning them, I’m commuting, and we’ve got to stop this business of over-punishing people….The United States…has a well-developed, articulate and often rather imaginative Left, but it certainly does not have a Left that has any chance of securing a majority of the American voters.”
—Interviewed by Jonathon Van Maren, thebridgehead.ca, July 6, 2018.

In this contestatious election year, these immense advances in national security and well-being will be appropriately recognized, on the hustings and in the voting booths.
—National Post, Sept. 8, 2019.

The Globe and Mail can dream on like Johnny Cash’s Teenage Queen, but Trump will gain a victory on that scale next year, and…he will have earned it.
—National Post, Sept, 27, 2019.

Trump’s loyalists are a solid army of roughly half the people, no defections in the House or the polls; he should win decisively enough to deter frivolous and vexatious criminalization of policy differences against presidents for a long time.
—Conrad. Lord Tubby, National Post, Dec. 6, 2019.

“I have no hesitation at all in predicting that in November he will win an overwhelming victory against the gang of clucks in the Democratic party.”
—Quoted in the Calgary Herald, Jan. 18, 2020.

“The Democrats have a bunch of clucks that are contesting Trump as the most successful first term of any president except for Lincoln, (Franklin D. Roosevelt) and Nixon. He’s going to run the tables in the balance of this year. He’s going to kill the Democrats and they deserve it.”
—Quoted by ctvnews.ca, Feb. 5, 2020.

Since the last election right up to the present, there has been the widespread view that Trump is an easy president to defeat. He isn’t, and barring something completely unforeseen, and I don’t mean Hillary Clinton or Michelle Obama suiting up for the big race, he won’t be defeated.
—amgeatness.com, Feb. 11, 2020.

Six months out, Trump still has the upper hand.
—theepochtimes.com, May 5, 2020.

[T]he president will stay the course and defeat the unholy coalition of improvident events and the shopworn Democrats who, in their desperation, have allied themselves with pestilence and mayhem.
—newenglishreview.org, June 5, 2020.

This looks like a close election now, but the only chance it will stay that way is if the Swedish experience doesn’t apply here, and the coronavirus spikes dramatically as the economy reopens. There is no reason to believe this will happen, and a death-dealing renaissance of the pandemic is the only hope the Democrats have left…. If Trump has calculated correctly, he will return to the voters as the man who defeated the coronavirus pandemic, cut taxes, ended illegal immigration, and delivered unprecedented prosperity to the country twice in four years. No such candidate is going to lose to Joe Biden.
—amgreatness.com, June 22, 2020.

If he sticks to his message, strictly respects the facts, and economic and public health trends continue, he should redress the gap enjoyed by his opponent in the polls by the end of the summer….
—theepochtimes, July 6, 2020.

A Democratic Party victory would cripple the free market, strangle the American tradition of earned upward mobility, buy votes with unprecedented cynicism and extravagance, and entrench a regime of socialist wealth redistribution…. Only the dementia of fanatical Trump-haters and the almost airtight political bigotry of the national political media have permitted this levitation to continue as long as it has. It will not make it to Election Day.
—amgeatness.com, July 23, 2020.

We will see the COVID-19 crisis subside, possibly accelerated by a vaccine, continuing economic recovery, the political consequences of the Democratic mollycoddling of anti-white racist urban violence, and we will see the full exposure of the constitutional crimes of the former administration…. All have seen the lightning; the thunder will come on November 3.
—amgreatness.com, July 30, 2020.

[I]f COVID-19 fatalities continue to decline alongside receding unemployment, it will be impossible for the American public to elect the Sanders proletarian revolution with the amiable stumblebum from Delaware as its Judas Goat.
—nysun.com, Aug. 10, 2020.

[B]arring another providential catastrophe to favor the Democrats on the scale of the coronavirus, this president will be reelected, and he will finally enjoy a honeymoon and be the only chief executive in U.S. history whose second term was more successful than his first.
—amgreatness.com, Aug. 28, 2020.

Trump will have to be careful not to be so demagogic that his credibility recedes, but he’s on a glide-path to victory now.
—amgreatness.com, Aug. 31, 2020.

[T]here are precedents for candidate Biden in fiction if not in U.S. history, but it will end in shambles on November 3.
—newsmax.com, Sept. 17, 2020.

It is…the right of Americans to be confident the system works as it should and as it was intended to do that are at stake. Improbable as it often seems, and whatever his failings, in this election Donald Trump is the candidate of honesty, competence, and legality.
—newenglishreview.org, Oct. 13, 2020.

But it is objectively unlikely that so accomplished a president and so incomparably more forceful and capable a candidate will be turned out of office.
—amgreatness.com, Oct. 21, 2020.

This was written at 4 a.m. EST on Nov. 4. The president appears almost certain to emerge with the majority of electoral votes…. It is…unlikely that his present margins…are surmountable without a greater tampering with the genuine vote than is likely to be possible given the degree of aggressive legal vigilance over the process that the president has already announced…. Trump appears to be only the 15th person to win two consecutive contested presidential elections…. He will almost certainly serve a second term…. No one can say that he won’t have earned it.
—theepochtimes.com, Nov. 4, 2020.