Twin kicks in the slats for Ezra Levant today, as the Rebel Commander’s defamation suits against Al Jazeera and The Narwhal both got flushed by the Ontario Superior Court as a SLAPPs (Strategic Lawsuits Against Public Participation.)

Both defendants, represented by Phil Tunley and Jennifer Saville, argued, inter alia, that the repute of Ezra and his alt-right gang of goniffs was already so fercockt as to be impervious to further blackening by pointing out Rebel’s popularity with mosque shooters and other nativist nutterbutters (Franks passim.)

The Hon. Justice James Diamond also noted the nothingburger of Lügenpants’ claim to have suffered damages:

“[T]he plaintiffs have led no evidence of any particular or specific economic harm or damage to their reputation as a result of the article. As in the Al Jazeera action, I believe that the plaintiffs’ obligation to lead such evidence was arguably even more necessary given the evidence…that the plaintiffs’ reputations are already poor to begin with (although I have made no specific finding on that submission).

“The plaintiffs have not led any specific evidence that any specific harm has been suffered as a direct result of [Brendan] Demelle’s publications. The only evidence of harm is Levant’s self-serving statement as follows: ‘I believe that the dissemination of these defamatory statements has damaged my reputation in this regard, and accordingly Rebel News and I should be entitled to compensation.’”

Dismissed! Cue the inevitable Rebel crowdfunding campaign as Rebel must pay costs (higher than normal costs awards) and pay its own legal costs.

(Attention, Rebel supporters: We interrupt this regularly scheduled beg-a-thon with an even more craven appeal for what’s left of your retirement savings.)

Please give generously to support Ezra’s fight to freely defame (freedom of speech, shurely?!—ed.) Dominion Voting Systems, which has notified Rebel it must preserve documents in anticipation of a lawsuit.

Along with Ezra, Dominion is going after the likes of Lin Wood, Georgia lawyer/Trump supporter, who called for Mike Pence’s execution, MyPillow CEO Mike Lindell, and QAnon Quackpots, Ron and Jim Watkins.

Dominion has already filed a $1.3-billion defamation lawsuit against Sidney Powell, erstwhile Donald Trump lawyer, who Rebel assisted in concocting the notion that Trump lost the election because thousands of votes were stolen/manipulated by the left-wing software firm headquartered in Toronto and led by an international conspiracy of George Soros, the Chinese Communist Party and Hugo Chavez (who died in 2013.)

Keean Bexte, Rebel investigative braunshirt, stoked this fantastical notion with a report that Dominion was sharing office space with Tides Canada, the commie do-good organization to which Soros once donated money. (Never mind that it was bullshit, Tides had moved out of the Spadina Ave. office building the previous year.)

What mattered was Bexte and Rebel had Powell’s seal of approval: 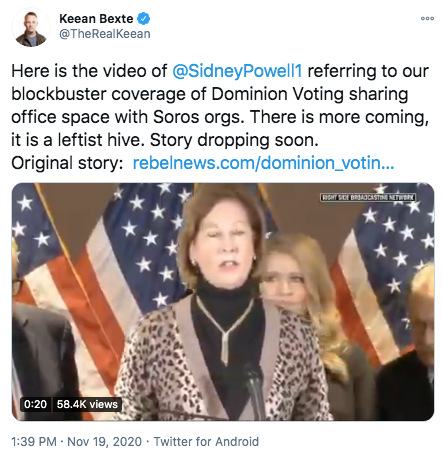 At the same time she was recycling Bexte’s fruitcakery, Powell met with Trump in the Oval Office to further gin up the Dominion conspiracy.

It soon became apparent, however, that Powell had no evidence. According to a recent Axios report, at one point in the meeting with Trump, Powell named a county in Georgia where she claimed she could prove that Dominion had illegally flipped the vote.

Trump senior advisor Eric Herschmann interrupted to remind her that Trump had actually won the Georgia county in question: “So your theory is that Dominion intentionally flipped the votes so we could win that county?”