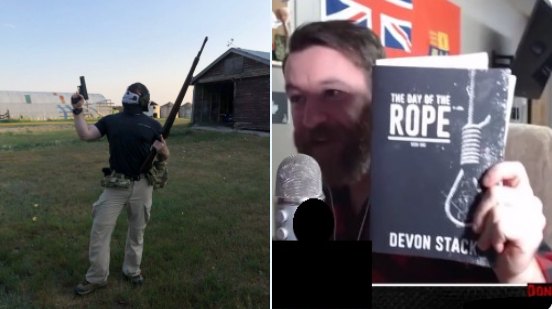 It’s not just Conservative MPs and Ottawa flatfeet clamouring for selfies with the Freedom Convoy droogs. The far-right, Covid-conspirazoid hate-in continues to draw fashy fanboys from the basements of disappointed and concerned parents across the country.

As my chicken-fucking cousins in Halifax report, not even a police raid and firearms charges could dissuade prominent Nova Scotia nutter Jeremy MacKenzie, AKA Raging Dissident, from goosesteppin’ down the road to Ottawa last weekend.

MacKenzie is not only an ex-Canadian Forces firearms enthusiast but a keen amateur historian with his own fresh, contrarian takes on, er, the Nazis, mostly. In an undated clip archived at AntiHate.ca, he Reichsplains:

“If you’re in their position, and you’re in a situation where it’s, like, the country’s half-run by Communists and if we don’t do something, the whole things gonna go down and we’re all gonna get fucked. So, maybe it’s time to do some extreme shit, you know what I mean? I understand their thinking. They weren’t crazy people ‘Let’s just murder,’ that’s nonsense. I guarantee you they sat down and went, fuck, I guess we gotta do it this way.”

When Halifax Frank called his parents’ home the morning of Feb. 2, the Plaid Army frother was still tuckered out from his adventures in Ottawa.

Timothy MacKenzie said Jeremy couldn’t come to the phone because was in bed. Told the reason for the call – the seizure of restricted weapons, body armour, etc., from their address January 28 – Tim said he’d pass on the message.

No wonder Jeremy was sleeping in. The 35-year-ol Afghan vet – he often tells viewers on his YouTube show, that he was an NCO in the Canadian Armed Forces before he found his calling as a 9/11 truther – had a busy week, including two appearances from his Ottawa hotel room with Alex Jones.

“Just like January 6, they may try to provocateur something,” the Infowars host speculated. 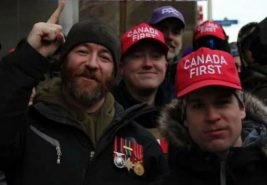 According to an RCMP press release, “On January 10 the Inverness County District RCMP began an investigation after a video was posted to social media of a man, in a business, waving a handgun around in a reckless manner and allegedly having an over capacity magazine.”

While speaking on the stream of another fellow traveller was asked if he was “comfortable” talking about his recent contretemps with the constabulary.

“Oh, I don’t want to get into it too much, but yeah, they’re, y’know, poking around, and, uh, y’know, trying to screw with me a little bit…It’s crazy because there is dangerous people in this country, and they get ignored. Especially if they’re in the ‘right’ political spectrum you get, like, Antifa and these people are beating up old people, and they’re blocking pipelines and railways…”

In a recent Instagram video, Jeremy noted the “intention of some people to frame or invent some kind of domestic terrorism narrative around people involved in this weekend, potentially myself and other people…This is ridiculous. If anything happens it was not me, it was not any of us. Everyone here is assembling peacefully to support the truckers and simply observe the beautiful movement that is our country trying to come together and rid ourselves and correct the very alarming trajectory this country’s on.”

His release conditions bar him from possessing any firearms, weapons, ammunition or explosive substances, but felicitously say nothing about marching on the capital.

7 comments on “Very Fine People: “If anything happens, it was not me, it was not any of us!””