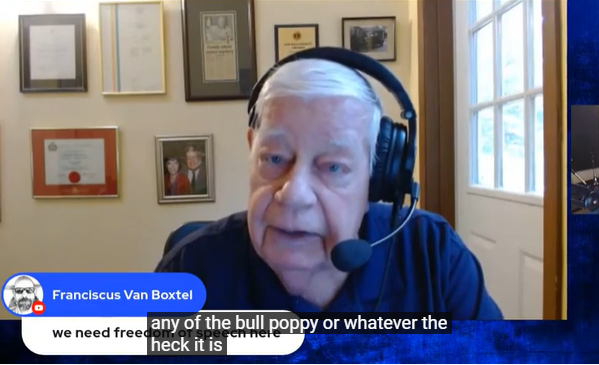 “I am 57 years old, and possessed of only a high school education. I have no assets, and no realistic hope of ever being able to retire.”
– Bankruptcy filings, 1993.

Ever think how different the hate radio radio landscape might be if Lowell Green was still alive today?

The CFRA tar pitter (admits to 85, is older) was bumped off the air in 2016, but still streams online his daily eructations on Liberals, environmentalists, welfare moms, socialists, vegetarians and Muslims. Just for half hour in the afternoon these days, you know how it is.

The latest cruel cramp in the broadcast legend’s active senior lifestyle came in October, in a fateful post-lunch fall at The Brew Table in Bells Corners. In a somewhat on-the-nose irony, Lowell claims he was tripped up by a safety barrier.

He’s suing the beanery for $250,000+ for injuries, loss of enjoyment, golf, etc. His longtime, already-suffered-enough co-vivant, Debbie Deans, claims $100,000 for “loss of care, guidance and companionship.” (is this right?!—ed.)

“On October 17, 2021, Lowell and Deborah were patrons at The Brew Table. They attended the restaurant for lunch and were seated indoors. Because of the COVID-19 pandemic the tables were separated from each other by plexiglass shields. Additionally, the government of Ontario had mandated for all individuals indoors to wear masks unless seated at a table.”

“At approximately 2:30PM, Lowell and Deborah finished their lunch. They put on their masks and were getting up from their table to leave.

“As Lowell stood up and started walking his foot caught on the base of a plexiglass shield that was jutting out. As a result, Lowell tripped and fell…

“The day of the fall, Lowell was assessed by paramedics. When his symptoms and pain did not resolve by the following morning, he was transported to the Ottawa Civic Hospital by Ambulance for further investigation and treatment.

“Prior to the fall, Lowell was entirely independent and enjoyed numerous activates [sic] such as golf and traveling with his spouse, Deborah. He was also deeply involved in his community, attending numerous charity and other community events.”

“Lowell’s injuries and impairments have significantly lessened his ability to enjoy his life. He is reduced in his activities and traveling, more dependent on his wife and other family members for care and less able to participate in family, work, social and recreational activities, including pet care. Where he is able to participate, it is less frequent, with pain and less enjoyment.”

No answer yet from the Brew Table or owner Nick Lambros, son of serial restaurateur Peter (Au Petit Cyne, Miss Linwood, Peter’s Pantry). Neither pub nor Lambros, according to a Frank check of Ottawa court records, is in the habit of being sued or suing.

Counsel for the defence is advised to look alive during discovery. The “best-selling author” and “Canada’s most honoured broadcaster” has a pronounced penchant for whoppers.

His claim to be Canada’s “most honoured broadcaster” depends on counting Order-of-the-Braunnose baubles like his Queen’s Jubilee and Canada 125 medals, and the “coveted” Helen Keller Award. (Strangely, an exhaustive search of every database known to man revealed no mention of Lowell and the Keller award. José Feliciano, Ronnie Milsap, The Blind Boys of Alabama, yes. Lowell, no.)

Lowell has also maintained at different times that he had a wing at an Ottawa Hospital named in his honour, that the City of Ottawa had a day named after him and that one of the news stories he once uncovered “prompted a special Senate Commission investigation in the United States“ (UFO’s shurely!?—ed.)

Every talk radio bloviator inflates his c.v., but Lowell outblows them all, claiming he’s author of several best-sellers, including the 2006 opus, How the Granola-Crunching, Tree- Hugging, Thug Huggers Are Wrecking Our Country. (Amazon review: “Brutal.”)

A sequel was tragically lost to Canadian letters when Lowell’s laptop went missing in 2010, leaving him raving on-air about left-wing radicals stealing his precious research. Callers muttered darkly about CSIS black ops to hide The Truth.

Our Lowell, whose daily colostomy never fails to include a grand mal fit of apoplexy over the Baublehead gubmint’s latest crime against fiscal prudence, never gets around to mentioning his own epic flameout.

Catastrophic investments in travel agencies and ice cream franchises forced Green into bankruptcy in May 1991, leaving creditors sucking the pipe for $1.6 million.

Debbie was also forced to declare bankruptcy. A Westboro triplex in her name went on the block under power of sale.

But 15 days before he filed for bankruptcy, cagey Lowell pulled a fast one, selling off his boat, a 1987 Doral inboard, to Hurst Marina for $12,000. When the receiver tried to secure the dough for creditors, Green shrugged that he’d already spent it.