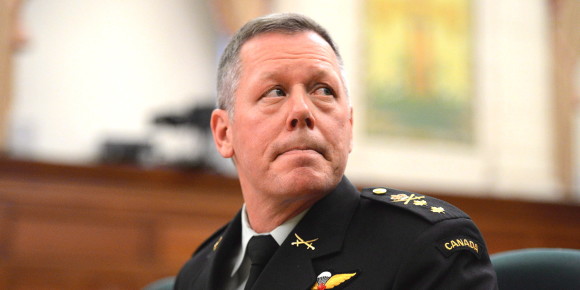 News that 9 out of 10 anonymous sources like Lt.-Gen Jonathan Vance for the post of Chief of Defence Staff is good enough for Frank.

After all, the big swinging swagger stick of the Canadian Joint Operations Command (CJOC) is prosecuting our mission against Islamic State no-goodniks with much martial panache.

And endless braunnosing media profiles remind us he also commanded our boys in Afghanistan in 2009 and then again in 2010–when he replaced Brig.-Gen. Daniel Menard, who had unfortunately tripped over his own dick.

Serial heterosexualist Menard got sent home to a court martial, demotion and hasty retirement for getting a leg over with a subordinate, Master Corporal Bianka Langlois.

Their horizontal PT regimen began in 2008 in Montreal, prior to their deployment to Afghanistan. Menard, who loves a gal in uniform, was married to Maj. Julie Fortin, a logistics suprema at CFB Valcartier, with whom he had two kids – and with whom he screwed around on the first Mrs. Menard, whose name escapes me.

The Menard-Langlois liaison, characterized as it was by noisy, nightly consultations, was hardly a secret in Kandahar.

But nobody blew the meat-whistle on them until April 2010, when VIP tourists Peter MacKay and cabinet colleague Rona Ambrose, then Minister of Public Works, arrived for a royal tour.

Rona, freshly divorced and on her first junket to exotic and dangerous Afghanistan, quickly developed a rapport with the gallant and attentive Gen. Menard.

One night, Menard liberated a bottle of scotch from the lockup, and he and the minister entertained one another late into the evening in his quarters, discussing affairs of state and whatnot. As you do.

Bianka went ballistic, and rushed to the base chaplain to confess her sins re her commanding officer. The chaplain confronted Menard and the general dug himself in deeper by attempting to stonewall the ensuing military police investigation.

But what of Vance’s own abbreviated sojourn as deputy commander of NATO’s Allied Joint Force Command in Naples?

Jonny came marching home from the Italian job last July after only a year in harness, dogged by persistent reports of his own intensive debriefings with an unnamed female subordinate.

Vance’s delightful spouse Jennifer subsequently packed up their daughter and sounded the retreat. She is said to be living back east, much pissed but keeping her lip buttoned about the whole unseemly contretemps. Why endanger her spousal support upgrade when the General gets his expected promotion to CDS?

While outgoing CDS Tom Lawson was apprised of the seamy details of the Naples affair, it is not known whether anyone ever troubled President Steve with them. And at this sensitive juncture, it would just be bad form.

That the likes of Menard can horizontal-march himself right out of the Canadian Forces, while Vance fucks up onward and upward is seen by some as dreadfully unfair, by others simply as a testament to our man’s royal jelly, and further evidence of his eminent suitability for the top job.

One comment on “Humour in Uniform: Gen. Vance’s slippery Naples”