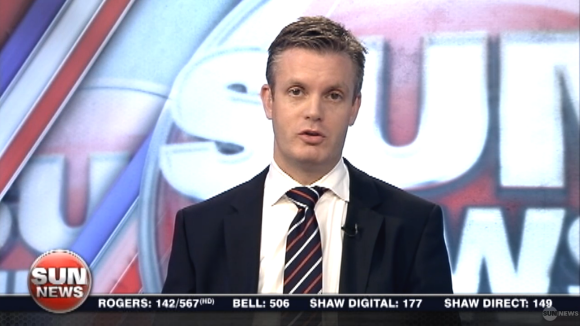 Now that President Steve has been deposed, his key sycophants, shineboys and stooges (yo, Jenni Byrne!) are in not only for generous helpings of unemployment and schadenfreude, but long-overdue airings of their dirty works from the countless unfortunates they once bullied, ostracized and screwed over.

Krista Erickson was quick to settle accounts with the old regime, with her memoir of attempted journalism under the baton of Sun TV propagandist-in-chief Kory Teneycke.

The pneumatic newsblonde, readers will recall, jumped ship from Sun TV back in 2013, after endless run-ins with Teneycke over his assignments of on-air talking points to staff, stacking the newsroom with clueless Tory hacks, incessant editorial interference, etc., (Frank, Oct. 15, 2015.)

Erickson’s own account of the Teneycke regime was published yesterday on National Newswatch.

But within hours, her piece, Harper Learns the Folly of Surrounding Himself with Obsequious Operatives, had been purged by the online aggregator.

Alas, from National Newswatch, reasons came there none.

Erickson was also in the dark: “I’ve asked for an explanation,” she wrote to Frank, “But NN has not provided one.”

Consider that the online pifflesheet is owned by its founder, Will LeRoy, and les frères Anderson, Bruce, Jim and Rick, and given their deep pockets, it stretches credulity to think that a legal shot across their bow would shake National Newswatch’s deep commitment to journalistic freedoms, integrity and (that’s enough drivel!—ed.).

More likely, Kory complained to Rick, (they worked together advising Harper); a chat with LeRoy ensued and poof! Problem solved.

The seminal moment of the 2015 federal election may belong to a man who had a very different notion of, “sunny ways”.  In the hours before the campaign’s first televised debate, former Sun TV founder Kory Teneycke told reporters, “I think that if (Trudeau) comes on stage with his pants on, he will probably exceed expectations.”

That hyper-partisan sneer from the former TV executive turned Conservative campaign spokesman will be inexorably remembered for its fundamental miscalculation of the opponent.  But Teneycke’s presence throughout the Conservatives’ decade in power is worthy of further examination.

Teneycke arrived in the Prime Minister’s Office in 2008, an inner-sanctum Conrad Black recently described as, “sclerotically rigid, media-inaccessible, authoritarian and peevish…a humourless and often paranoid regime,” led by a, “sadistic Victorian schoolmaster.”  Teneycke would serve as Director of Communications.

In 2009, Teneycke was reportedly present when Fox News founder Rupert Murdoch petitioned Stephen Harper to relax media foreign ownership restrictions during a private meeting.  The obstacles to exporting Murdoch’s Conservative firebrand to Canada would be Teneycke’s advantages.  He set off to launch the Sun News Network later that year.

To supporters, the cable news network would bring balance to a Liberal-dominated media culture in Canada.  To skeptics, it was a weapon in the Conservatives’ arsenal designed to advance the party’s strategic objective of incrementalism, shifting the Canadian electorate rightward with permanence.

Former Harper cabinet minister Lynne Yelich was one of the network’s early supporters.  Before a frame of Sun News programming had even aired she warned of problems to come.  “It’s a great idea but you’ve got to get rid of Kory Teneycke,” she told me in July 2010.  “It will never work as long as he’s running it.”

Teneycke, like Harper, is a controlling authoritarian who hails from the Reform wing of the party.  When the political stakes were high for Teneycke’s brethren, his partisanship often went into overdrive and the network’s spirit of fearless inquiry went out the window.

In the 2011 federal election, when the NDP’s “Orange Wave” threatened Harper’s prospects, the story of Jack Layton’s visit to a massage parlour fell into the lap of Sun News.  The incident occurred sixteen years earlier when police encountered Layton naked on a massage table.  There was no arrest, no criminal charge; therefore no criminal behavior.

On these facts, the justification of a public interest in running the story was arguably thin.  Management saw it differently, repeatedly descending on my office in the hours before broadcast to coach me on the editorial approach to be taken on-air: this was a major sex scandal involving the NDP leader.

Similarly, in the final stretch of the 2012 Alberta election, when the Reform Party’s provincial cousins, The Wildrose Party, lost momentum to the Progressive Conservatives, Teneycke and his subordinates instructed me to stop reporting on the homophobic gaffes of Wildrose candidates.  He also demanded a segment discussing the Wildrose leader’s record on abortion be removed from my program lineup, an order that I resisted.

Teneycke then zeroed in on Justin Trudeau.  To be fair, it was former Sun host Ezra Levant who first coined the name, “Shiny Pony,” in reference to Trudeau’s enviable hair.  It was Teneycke and his designates who institutionalized the term at Sun News.  “Shiny Pony” appeared in our “talking points” otherwise known as the daily assignment note issued to Sun News journalists.  The label also figured prominently in Sun’s broadcast of Trudeau’s decisive victory over burly Conservative Senator Patrick Brazeau in a widely promoted boxing match for charity.  It was just the first time Teneycke would wholly underestimate the young Liberal MP.

Staff who didn’t fall in line with talking points and Teneckye’s worldview were also in his sights.  He hatched a plan to fire 40 to 50 percent of the Sun News staff, many of whom he suspected were Liberal sympathizers.  The house-cleaning was to take place after the CRTC approved the network’s application for a mandatory carriage license, an event that never came to pass.  Teneycke’s plans included populating the newsroom with even more Conservative staffers.  “You can’t teach a producer how to be a Conservative.  But you can teach a Conservative how to produce,” he told me.

Evidently, there were some Conservatives who couldn’t be taught.  Former Harper speechwriter Michael Taube was a valued contributor who regularly appeared on the network.  Taube’s record of criticizing some of the Harper government’s policies such as income splitting did not gain him favour with Teneycke.  Producers were ordered to stop booking Taube on our program.

Even the apolitical was viewed through a partisan lens.  Case in point, the network’s coverage of the RCMP’s 2012 investigation of the suicide of 15-year-old Amanda Todd.  Teneycke told producers that Sun News was not going to continue to cover the story and, “help create another dead celebrity teen,” while assisting the Official Opposition with its proposed anti-bullying legislation.

I was not immune from Teneycke’s tyrannical flashes and paranoia.  In June of that year, one of his sycophants was listening through the walls of my office as I shared my concerns with my husband over the phone.  Teneycke’s incendiary rebuke came swiftly.  “This is not the CBC,” he told me.  “You will not be afforded due process or an arbitration hearing.  If you don’t change your attitude and quickly, it will not end well for you.  Do you understand me?”  I began planning my departure shortly thereafter.

Sun News folded earlier this year less than four years after its launch.  It remains a curious business that Teneycke walked straight into the job of chief spokesman for Harper’s 2015 re-election campaign.  Apparently, the media racket was beneath him.  “We’re better than news, we’re truthful,” he told Global News when defending the party’s attack ads in July.

If there was any doubt of the proximity of the late Sun News to the Conservative power structure, Teneycke’s homecoming surely put those doubts to rest. But his appointment was one of many missteps in an ill-fated re-election campaign.  It was bad policy for the Conservative leader to surround himself with obsequious operatives who appealed to his worst instincts.

“This is not just about the prime minister but obviously the Prime Minister’s Office absorbed and reflected his combative approach, ” outgoing Defence minister Jason Kenney conceded after the party’s defeat.  Without a newsroom or a war room to launch hyper-zealous missives from, it may be Kory Teneycke who is caught with his pants down.

Krista Erickson was senior anchor at the Sun News Network and a former parliamentary correspondent for CBC News. She is a media consultant and law student at BPP Law School in London, U.K., completing her LLB in November.