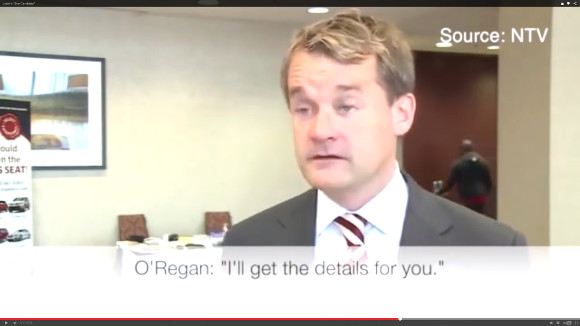 Semen O’Regus’s Twitter revelation that he had entered a “wellness program” over the holidays came as no surprise to longtime friends of the former CTV televisual personality.

O’Regus, recently-minted MP from Newfoundland (Lib.–St. John’s South-Mount Pearl), announced in flawless Liberal Duckspeak: “After consultation with family [I have decided] that I can be most effective as a Member of Parliament by adopting an alcohol free lifestyle…I have entered a wellness program…my family and I ask for privacy.”

(Translation: “What drinking problem? I don’t have a problem! Let’s call it ‘alcohol free lifestyle.’ And play up that ‘most effective’ MP bit. For Chrissake, don’t mention ‘rehab.’ Make it ‘Wellness Program.’”)

O’Regus comes by the gargle honestly. His father, Seamus The First, a onetime justice on Newfoundland’s Supreme Court, was also a prominent pisse artiste. But the elder O’Regus, who had bypass surgery last week, gave up the plonk years ago.

Semen’s bibulous adventures go way back. Colleagues on CTV’s Canada AM recall him wobbling into the studio, still reeking from a night on the piss in Ottawa. He’d taken the last flight out of the capital and then stumbled straight from the airport to CTV and on air.

His infamous appearance on NTV last June, where he twice wandered off camera during an interview, was a matter of being too hung over to think straight. https://www.youtube.com/watch?v=pOo3bToApwA

Now, after some rat-arsed hijinks over Christmas and an intervention by friends and family, Semen’s taken the pledge.

Frank wishes him the best of luck. It won’t be easy.

3 comments on “Semen dries out!”