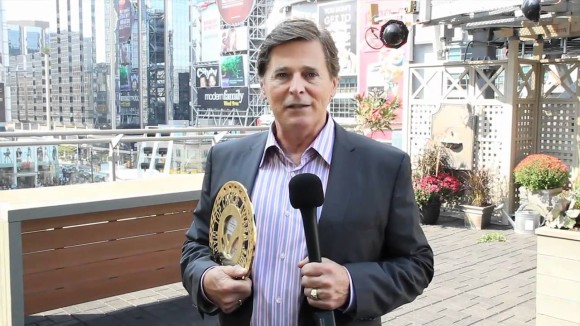 So farewell then, Gord Martineau.

The venerable anchorthingy has hung up his hairspray after 39 years of bingo calling for Citytv, and the accolades pour in from fellow hacks like James Bradshaw, John Doyle, Richard Madan and Kevin Frankish (er, who dat?!—ed.)

Salutes to the Giant of Journalism™, also came from celebrated Blacktivist Desmond Cole, who retweeted Kaleem Maxwell: “Man…spectacular run in broadcasting and was part of me getting interested in media. Best wishes!”

No less an authority than Eric Ehm even weighed in: “Full respect to Gord Martineau, a class act both on and off camera.”

Thankfully, none mentioned Gord’s legendary outtake reel, a spectacularly vulgar series of promos (leaked online in ’04) in which Martineau called singer Roch Voisine “a homo,” mocked a walkathon for children with cancer and said his dick had more news value than a pancreas transplant.

Martineau made the remarks during an undated taping of promos for Citytv’s six o’clock newscast. (Excerpts here)

With co-anchor Anne Mroczkowski beside him, he waves his arms and speaks in an exaggerated lisp:

“I always wanted to sing like Roch Voisine. ‘Ooooohhh…it’s gayyyyy…’ Roch Voisine, the homo. He wanted to buy [the young guy] to have sex with him….because he’s a ‘Pepsi’?!”

After yukking it up over a walkathon for children with cancer, Martineau says: “Boy, we’re sensitive, eh? Oh, fuck. OK, I’ll go to confession tomorrow, I promise.”

Mroczkowski defends the item as an interesting medical story, to which Martineau points at his dick: “This is interesting. That is not.”

Frank hosted the full Gordie online in January 2004 for the erudition of his many fans and admirers, until Citytv lawyers prevailed upon my organ to Cease and indeed Desist.

Steve Hurlbut, then Citytv VP, claimed the clips were taken out of context and would give viewers an unfair measure of Martineau’s impeccable character.

In an internal pep rally/HR ass-cover email to the troops, he wheezed:

“Gord Martineau is my friend and colleague. He has my total support. I don’t wish to belabour this recent incident but I have a few observations. The events of the past 24 hours have sensitized us to a number of things, the most important of which is that as we found ourselves at the critical centre point of a negative story we needed to look closely at who we are and what kind of work we do. I can truly report that we are who we say we are. We are Toronto’s News and indeed everyone is welcome…I want to go on the record with our commitment to maintaining a workplace environment where people have fun but also a place where people are fully at ease with whatever they hear and experience. Should anyone hear anything that makes them uncomfortable, my door is open, please let’s talk about it and fix it.

“So let’s make this moment of notoriety an opportunity for us to showcase our dedication to each other, to Toronto and to everyone who calls Toronto home…and oh yes, be careful out there.”