Bow-ties of bathos at the Toronto Star

How curious that John Honderich chose this week to announce that he would permit an independent review of the Toronto Star newsroom in the aftermath of the suicide of environment reporter Raveena Aulakh last May.

For weeks, the Star chairthingy and his editor, Michael Cooke, had resisted union demands for an outside investigation into the circumstances around Aulakh’s death. But they finally capitulated, acknowledging in a memo that staff had raised “legitimate concerns” that merited investigation. (Honderich couldn’t even get the memo right, referring to Aulakh as “Ravenna.”)

Shurely Honderich’s sudden volte face wasn’t designed to get ahead of a damning exposé due for publication next week in the National Post, one that paints a grim picture of harassment and coverup at the highest levels of Star management, and which will send Lerch’s bow-tie spinning into orbit. Shurely!

Keen to equate the Star with the Ghomeshi-stained CBC, Postmedia interviewed several female Star staffers about their relationships with Jon Filson, the disgraced senior editor who ditched Raveena in favour of ME Jane Davenport.

But Filson had a different MO than Ghomeshi; he bullied both male and female underlings and drove several talented hacks out of journalism, including much-liked sports reporter Dan Girard.

Another Star alumnus, who quit journalism after her Filson experience, wrote on the ex-Starites Facebook page last month:

“[He] had a special talent of making me feel like crap and crushing me (and no, there was no romantic involvement, he was just someone who crippled my soul, writing-wise and newspaper-wise, amidst a sea of brilliant and wonderful people).”

Many past and present Star hacks refused to be interviewed by the Post. Among them, Stephanie Cesca, onetime Star national editrix, who last year complained about Filson’s abuse to her boss, the aforementioned Ms. Davenport. As Cesca castigated her bedmate, Davenport sat and nodded, making little comment.

Two months later, Cesca was fired by the Star and left daily journalism. She now works for the provincial government.

Following a Frank reference to her in a Raveena story, Cesca sicced her lawyer on the satirical press to demand a retraction/apology.

The missive was copied to Cooke apparently because Cesca didn’t want Star management to get the false impression that she had provided any “information in relation to this story.” Thus Star lawyers were assured Cesca hadn’t violated the NDA she signed last year in order to collect her severance (hush money, shurely?!—ed.) following her dismissal. 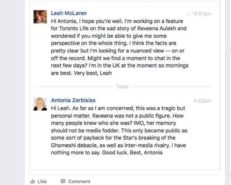 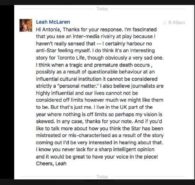 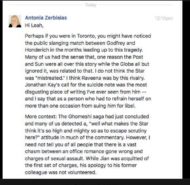 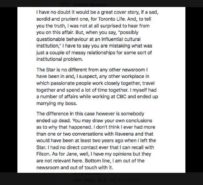 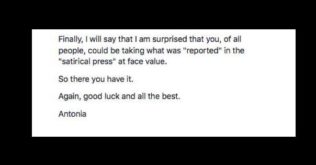 3 comments on “Bow-ties of bathos at the Toronto Star”