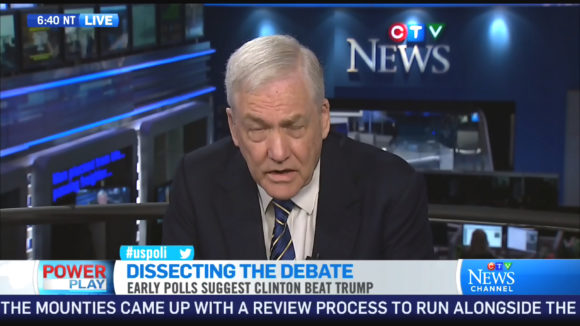 Somebody needs a new pair of bunny ears for their Dumont

DM: All right, American presidential biographer and former newspaper chain owner Conrad Black joins us from Toronto with his thoughts. All right, Conrad, do you agree with the instant polls and punditocracy that Clinton bested Trump last night?

CB: I do. But only narrowly and not in a way that I think will in fact affect the polls. I agree that Mrs. Clinton did…win on points. They were really looking for Donald Trump to blow up and say something outrageous, say something as infamous as Mrs. Clinton’s reference to half of his followers as “deplorables.” And he didn’t say anything like that. And, uhh, therefore, I think he won on the temperament thing.

“No one with an open mind and sound reason who witnessed the sniffing, sipping, scowling, raging, interrupting display of petulance and agitation that was Donald Trump’s debate performance on Monday could possibly argue…that he is the kind of person to whom we should entrust the presidency.”
—Charles M. Blow, New York Times, Sept. 29, 2016.

As he pointed out, they’ve spent $200 million dollars saying that he is mentally unstable and would be a menace as president, and I think he pretty much got rid of that and lives to fight another day because he didn’t fire his big ammunition.

You’ll recall that I said earlier in the campaign that once he’d rounded up the Archie Bunker vote, he’d try and get the moderate centre and add to his Archie Bunker block that got him the nomination and that’s what he’s trying to do.

If that ain’t the Black calling the kettle pot!
—Archie Bunker

I think it was not an impressive debate for either of them. I was shocked at how they misspoke, and I didn’t think Mrs. Clinton was much better than Donald. I found her use of the word “praiseworthy,” when what she meant was “laudatory”—so she said the exact opposite of what she meant to be—even more irritating acoustically than his improvisation of the word “braggadocially” [sic]. There is no such word, but at least you could understand what he meant by it….

By the way, I have to make another point, when Donald said that the stop-and-frisk rule had not been judged definitively as unconstitutional and Mrs. Clinton had said that it had, and the moderator, uhh, Lester Holt, supported her, I thought that was a shocking absence or lapse of professional journalism. Trump was right. It’s fine that Mrs. Clinton will disagree with him—even though in fact he is right—but for the moderator to intervene like that, I thought was a shocking act of partisanship…

“’I thought Lester did a great job,’ Trump said. When asked by CNN whether the questions were fair, the real-estate mogul said he ‘thought it was great….’ ‘I thought Lester Holt did a fine job,’ Fox News host Megyn Kelly said shortly after the debate concluded. ‘Conservatives should agree @LesterHoltNBC did a very fine job moderating. He pushed on birther issue and Iraq War but gave plenty of time,’ conservative radio host Hugh Hewitt, a Trump backer, tweeted.”
—Maxwell Tani, businessinsider.com, Sept. 26, 2016.

DM: Donald Trump says he’s pulling back and refraining from the infidelity issue to wrap up the debate. Does he drop the bomb in the next debate or does he stay clear away from that one?

“Donald Trump surrogate Scottie Nell Hughes asserted on Tuesday that the billionaire candidate’s history of adultery was not a negative character trait because he eventually became ‘friends’ with his former wives.”
—David Edwards, rawstory.com, Sept. 27, 2016.

CB: I don’t think the sex thing has any legs. If she starts calling him a misogynist and anti-women he will once again point out that she is the facilitator of the greatest sexist and the outrageous philanderer in the history of the White House, and that includes a fair amount of infidelity.

But I don’t think he will start into that, and, basically, I don’t think the public care about the issue, and she shouldn’t start this nonsense that Donald is anti-women.

“’Fox News’ Megyn Kelly called him out on his sexist behavior during the GOP debate on August 6, reminding him: “You have called women you don’t like ‘fat pigs’, ‘dogs’, ‘slobs’, and ‘disgusting animals.’”   Trump laughed off the question, claiming he doesn’t “have the time for total political correctness,” Later, Trump called Kelly a ‘bimbo….’”
—Nina Bahadur, huffingtonpost.com, Aug. 19, 2015.

And the birther thing was a ridiculous issue. He never should have got into it. But, stupid though it was, it was never racist.

“Trump used birtherism and other forms of racist agitation to build a political base for himself, and now that these defining crusades are impeding his pursuit of political power, he is trying to discard them in the most contemptuous and brazen possible way. Rather than disavow and apologize for his birtherism, he fabricated a new history in which Clinton had given life to the birther movement and he had merely settled the issue by forcing Obama to produce his birth certificate.”
—Brian Beutler, newrepublic.com, Sept. 19, 2016.

CB: Be careful there, Don. The twain shall never meet, Don!

5 comments on “Mega Drivel: Tubby Black on The Great Debate”