If bible-basher Brad Trost was to stand any chance of out-assholing the rebarbative Dr. Kellie Leitch, her every dark impulse enabled by campaign manager Nick Kouvalis, he would need an equally grimy hand to steer his Tory leadership campaign.

So nobody was more relieved than Frank when he tapped the inimitable Mike Patton as his field marshal.

And it’s been a hoot so far, with Trost vowing to resurrect long-dead legislative revenants like the Unborn Victims of Crime Bill, keep weiners resolutely out of the ladies’ room and, in a related obsession, roll back the socialist menace of same-sexy marriage, as cheekily expressed in his two-in-the-pink-none-in-the-stink plug for the old, normal kind. 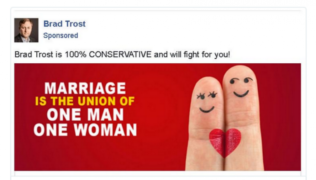 The extremely straight member for Saskatoon-University himself walked the walk down the aisle with delightful spouse Gerelt after a chaste Christian courtship of seven years or so. Last April, after a couple more years of closing their eyes and thinking of defunding Planned Parenthood, unto them a daughter was born.

But I digress. We last saw Patton in 2014, snuffling around Maria McRae‘s structurally-reinforced and still-warm city council seat. He declared his candidacy in River Ward within 72 hours of her retirement announcement.

Our Mike was even then a seasoned campaign dog. The 53-year-old Little Shit™ has done it all, from robocall specialist to Astroturf activist, heckling Liberal campaign events back in ’04 as founder of the entirely spontaneous and non-partisan “People for the Ethical Treatment of Taxpayers.” (geddit?!—ed.) 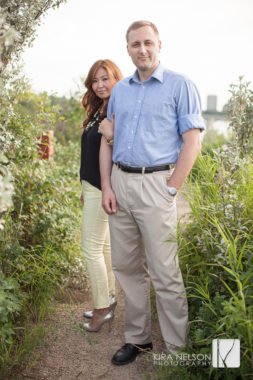 Brad and the wife

Patton performed his most conspicuous act of public service as bumboy to College Coun. Rick Chiarelli in 2006, after a constituent called to complain of a Code Brown emergency in one of the washrooms at the main library.

Mike shortarsed it over from City Hall, peeked inside and confirmed what he would later describe as a “poo apocalypse” in the stall. Rather than wait for a library staffer to deal with the diarrheal disaster, Patton bravely fetched a mop and pail and squelched up the merde himself, earning plaudits from the public — and dark mutterings of a grievance from the unionized janitors.

He would go on to other shit jobs as a media spinner for the accident-prone likes of Ottawa Mayor “Leisure Suit” Larry O’Brien and Minister of Babysitters, “Justice” Vic Toews, for whom Mike is credited with whipping up that “you’re with us or you’re with the child pornographers” zinger.

Alas, despite his years cleaning up countless messes in the back of the shop, voters have proven unreceptive to Patton’s many offers of his own elected service. A summary:

1997: As fartcatcher to PC leader Jean Charest, loses a squeaker nomination race in Ottawa West-Nepean, then parachutes into Labrador for the election, where he gets shellacked by Liberal Lawrence “Not Larry” O’Brien. Final tally: 842 votes. He makes his third grab for glory back in Ottawa that November, running for regional council against Al Loney, who, er, blows him away, taking 64 per cent of the vote.

2007: Joins the great pre-indictment exodus from the office of Mayor Larry “Not Lawrence” O’Brien to run for the provincial PCs in Ottawa West Nepean against Jimbo Watson, who hands him his ass by 8,400 votes.

2010: Jim quits to run for mayor. Mike loses the Ontario PC nomination in Ottawa West-Nepean to Beth Graham, who in turn loses the election to Liberal Bob “The Charisma” Chiarelli.

2014: In the hairpull for vacant River Ward, Mike finishes third, with 1427 votes behind Riley Brockington (3997) and Vanessa Sutton (1897). Little surprise, perhaps when Brockington could draw on a whore chest of $18,699 in personal and corporate campaign donations to Mike’s $1,035. Second-place Sutton, however, also surpassed him without accepting a penny from donors.

With a career batting average of .000, Mikey’s talents could only be of interest to a strongly faith-based candidate like our Brad.