Another kick in the pills for Frank D’Angelo, the hardest working man in show biz.

When he’s not hosting The Being Frank Show, a self-financed late night TV program, Frank (no relation) flogs his Cheetah Power Surge drinks, runs a Toronto resto, the Forget About It Supper Club, and makes horror flicks, the most recent of which was Sicilian Vampire, written, produced, directed and attended by Frank D’Angelo.

Frank’s a good Catholic Italian boy, who stays clear of any of that hanky-spanky for which Toronto is notorious, so when an endorsement deal with hockey player Mike Zigomanis went squirrely, D’Angelo immediately pulled the plug. 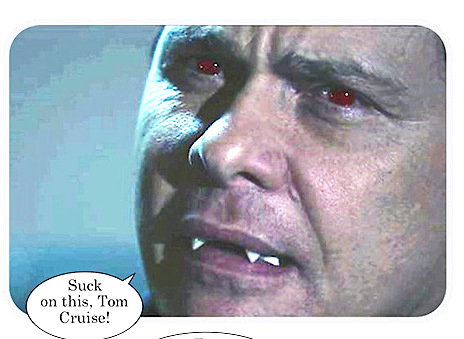 “[Ziggy] assures us that the nude photos are not of him. He has retained a lawyer to help him put an end to this,” Burke said with a straight face.

Alas, the dong on display was in fact Ziggy’s, so D’Angelo tried to break their contract.

Ziggy responded with a lawsuit. That was back in 2011. This week in Ontario Superior Court, Justice David Stinson ruled in Ziggy’s favour, although he was vastly unimpressed with his explanation for lying about the nude snaps:

“The plaintiff conceded that he lied to his coach regarding the nude photos. His explanation for his lie – that he was advised by his lawyer to do so – is both suspect and problematic. To begin with, from an ethical standpoint, it would be questionable whether a lawyer should be giving such advice to a client, which leads me to question whether such advice was actually given.

“The plaintiff denied the suggestion that he lied to his employer because he knew it would be damaging to his relationship with the hockey organization. He said he could not recall why he lied, except that that was what his lawyer told him to do. When it was suggested to him that he thought the truth would be damaging, he said he could not recall what he was thinking at the time. He was not prepared to admit the obvious – that if he admitted that the photos were of him, it might somehow be damaging for his career prospects.”