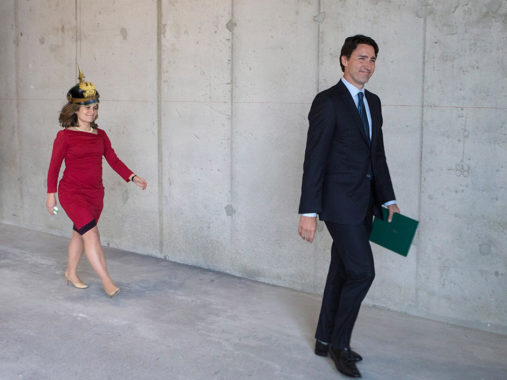 A decorous and merciful silence so far from Canadian news media vis-a-vis Chrystia “Britney” Freeland‘s rapidly-unravelling family history, in which the foreign minister understandably emphasizes her Ukrainian grandpa’s wartime flight from the Soviets rather than his tour of duty as a Nazi propagandist (Frank 82).

But the latest media outfit to take an interest in the minister’s grandfather, Michael (Mykhailo) Chomiak, and his wartime editorship of the Third Reich Ukrainian-language pifflesheet Krakivski Visti, is uncomfortably close to home, in the U.S.

Consortium News, Iran-Contra gumshoe Robert Parry‘s indy news site (and winner, for what it’s worth, of the 2015 I.F Stone Award from the Nieman Foundation at Harvard), put a bustle in the minister’s hedgerow with a Feb. 27 exposé subtly entitled A Nazi Skeleton in the Family Closet.

“The family story told by Freeland portrays her grandparents as World War II victims, but that is not the real or full story,” writes Consortium’s senior Uke correspondent, Arina Tsukanova.

“Chrystia Freeland’s dark family secret is that her grandfather, Mykhailo Chomiak, faithfully served Nazi Germany right up to its surrender, and Chomiak’s family only moved to Canada after the Third Reich was defeated by the Soviet Union’s Red Army and its allies – the U.S. and Great Britain.

“Mykhailo Chomiak was not a victim of the war – he was on the side of the German aggressors who collaborated with Ukrainian nationalists in killing Russians, Jews, Poles and other minorities. Former journalist Freeland chose to whitewash her family history to leave out her grandfather’s service to Adolf Hitler. Of course, if she had told the truth, she might never have achieved a successful political career in Canada. Her fierce hostility toward Russia also might be viewed in a different light…

“So the truth appears to be that Chomiak moved from Ukraine to Nazi-occupied Poland in order to work for the Third Reich under the command of Governor-General Hans Frank, the man who organized the Holocaust in Poland. Chomiak’s work was directly supervised by Emil Gassner, the head of the press department in the Polish General Government…

“On April 24, 1940, Krakivski Visti published a full-page panegyric to Adolf Hitler dedicated to his 51st birthday (four days earlier). Chomiak also hailed Governor-General Hans Frank: ‘The Ukrainian population were overjoyed to see the establishment of fair German authority, the bearer of which is you, Sir Governor-General. The Ukrainian people expressed this joy not only through the flowers they threw to the German troops entering the region, but also through the sacrifices of blood required to fight Polish usurpers.’ (Because of Frank’s role in the Holocaust, the Nuremberg Tribunal found him guilty of crimes against humanity and executed him.)

“Beyond extolling Hitler and his henchmen, Chomiak rejoiced over Nazi military victories, including the terror bombings of Great Britain. While praising the Third Reich, Krakivski Visti was also under orders by the German authorities to stir up hatred against the Jewish population. Editorial selections from Chomiak’s newspaper can be found in Holocaust museums around the world, such as the one in Los Angeles, California.

“The Nov. 6, 1941 issue of Krakivski Visti ecstatically describes how much better Kiev is without Jews. “There is not a single one left in Kiev today, while there were 350,000 under the Bolsheviks,” the newspaper wrote, gloating that the Jews ‘got their comeuppance.’

“That ‘comeuppance’ refers to the mass shooting of Kiev’s Jewish population at Babi Yar. In just two days, Sept. 29-30, 1941, a total of 33,771 people were murdered, a figure that does not include children younger than three years old. There were more shootings in October, and by early November, Krakivski Visti was enthusing over a city where the Jewish population had ‘disappeared’ making Kiev ‘beautiful, glorious.’ Chomiak’s editorials also described a Poland ‘infected by Jews.'”

But the comics page was doubtless a hoot!