The Sorry, Sorry Life of Brian 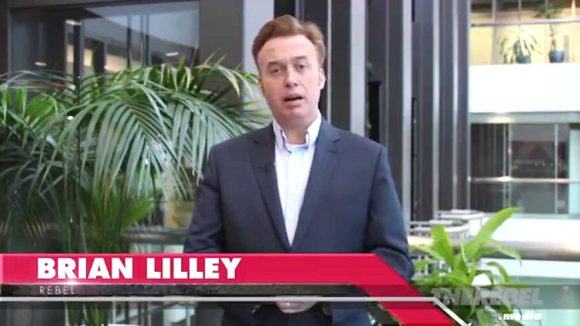 First there was Jack Posobiec, Ezra’s prize catch as Rebel Media’s Washington “bureau chief,” peddling a bizarre tale about how Emmanuel Macron’s wife, Brigitte, seduced the French president so the “elites” could mind control him with ecstasy and crystal meth. 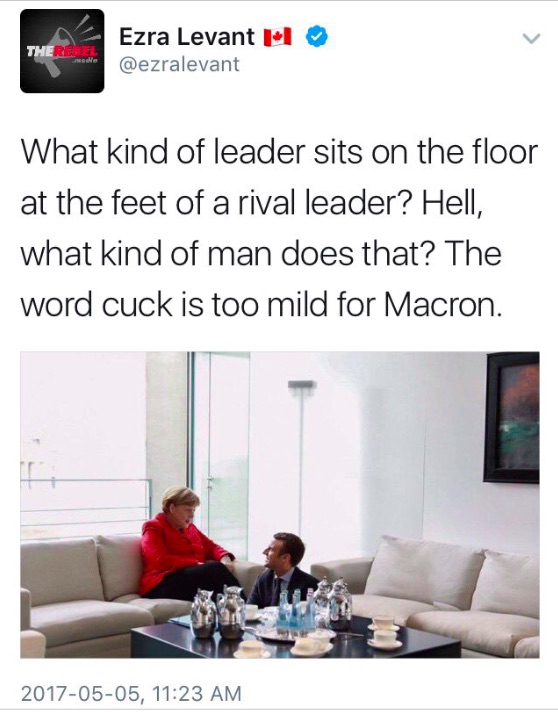 Ezra himself had already been suckered by an obvious Photoshop of Macron sitting at Angela Merkel’s feet, when up popped Posobiec to claim that Eric Duhaime, the Quebec right wing radio host, had been instrumental in helping to translate the bogus emails, documents and photos from Macron’s election campaign. When Duhaime threatened legal action, Posobiec was obliged to publicly state that his claim was “false,” and Ezra disavowed Posobiec’s remarks as trolling.

Then Posobiec glommed onto the widely discredited Seth Rich story, which even Ezra had rubbished. Before Posobiec could drag Rebel into further legal trouble, Levant sacked him.

Enter Brian Lilley, smart-haired Rebel co-founder and tireless pro-life bore, to cough up an apology to NDP leadership hopeful Niki Ashton after she announced her pregnancy this week.

Of course, this wasn’t the biggest cow flop Lilley has managed to step in.

That honour goes to his crypto-racist/misogynist harangue against Muslims in March 2012, in which Brian and fellow Sun TV doofus David Menzies fulminated over an obscure pamphlet written by an obscure Muslim describing the “Etiquettes of Marriage: How to Beat Your Wife Gently.”

Menzies: “I used to say ‘Say it with flowers.’ I guess say it with fists is the new buzz word.”

Lilley: “Muslim women are seen as investments, hit them gently, don’t want them marked up.”

Lilley: “You’re hitting the nail on the head”

Brian finally caught the attention of his Quebecor masters when he crapped on CBC for going “all native” with those “ridiculous,” (but accurate) pronunciations of names of Quebec athletes like Hamelin, Bilodeau and Dufour-Lapointe.

If Corpse hacks weren’t such a bunch of politically correct, latte-sipping hipsters, said Lilley, they would mangle the francophone names a la Don Cherry and Foster Hewitt (“Here come the Canadians, Gene Belivou, with Henry Ritchard!”)

“CBC goes nuts, over-pronouncing French names of Olympic athletes. It’s just so we smelly bumpkins remember our place. It’s Anglophones speaking to mostly other Anglos while over emphasizing the French pronunciation of names. ‘See, me cultured.’”

This was all too much, even for the Peladeaus, who ordered Sims (now working with Evan Solomon on CFRA) to delete her tweets and demanded Lilley offer his own kneebender: “I should have known better…I’m sorry…it will never happen again…I’m sorry…I apologize.”

Ah, but of course it did happen again. After Ashton announced, “I’m happy to share the news that I’m expecting,” Lilley snarked:

The ensuing Twitter shitstorm and pressure from his Bell Media masters prompted Lilley to go on his CFRA Radio talk show and issue yet another grovel.

Keep at ‘em, Brian. You’re getting the hang of it.

3 comments on “The Sorry, Sorry Life of Brian”