Bruising days for Ezra Levant, as the Rebel Obergruppenführer stares down an ad-shaming campaign by Sleeping Giants, the anti-racist buzzkill collective, which claims to have driven a reported 2,000 online advertisers away from fake news stalwart Breitbart, and now threatens to do the same to its dumber Canadian cousin.

Add to these travails the abrupt departure of Jack Posobiec, bonkers Pizzagate provocateur and Rebel’s short-lived “Washington Bureau Chief” amidst the Macronleaks and Seth Rich shitshows, the arrest of Ezra’s UK-based senior skinhead, Tommy Robinson, and the usual ongoing defamation dramas, and one wonders how the little pisher manages to get up and put on his jackboots some mornings.

No doubt at times like this Ez’ closes his eyes and thinks of his idyllic home life with his delightful second wife, Irina, and their expensively private-schooled son and two daughters, all joyfully anticipating the completion of their dream home in Forest Hill.

The House of Ezra, still under construction, is (in a prudent bit of judgment-proofing by the litigation-prone Lügenpants) registered in Irina’s name. 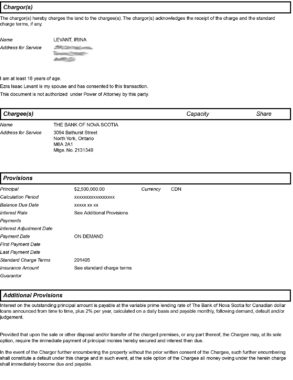 The Levants snapped up the property for a mere $1.6 mil in 2014, while Ezra was still drawing a regular Sun TV paycheque. The purchase, the bulldozing of the existing shack and the construction of a new monster home were financed with a $2.5 million mortgage from Scotiabank.

Last October, they took out a second $1.2 million mortgage with the delightfully-named Gonad Holdings Inc. (Put Your Glands in the Hands of the Man!) Gonad is squeezing Ezra for interest-only payments at eight per cent per annum, or $8,000 a month.

Alas, as with all things Ezra, nothing is as simple as it seems, and even as ongoing work on the Levant dream home continues to disturb the peace of long-suffering neighbours, irate tradesmen are complaining of being bilked and lawyering up.

Diamondwood Management, Inc., project manager of the construction from June 2015 until their replacement last October (right around the time of that second mortgage with Gonad), claims the Levants are still into them for $184,972.84

“To date, Diamondwood has made numerous demands for payment from Levant for the outstanding amounts owed to Diamondwood in respect of the labour and materials that it supplied in relation to the Project,” reads the statement of claim, drawn up by legalists Jonathan Goode and Kayla Kwinter (Torkin Manes LLP) and filed at the Toronto courthouse Apr. 24.

Further down Ezra’s dine-and-dash food chain, Jcon Design Build, Inc. hired to do the actual construction, filed their own suit April 27, naming Diamondwood, Irina, Gonad and Scotiabank as defendants. They claim to be out $118,650 for work completed. E. Alan Garbe, barrister and solicitor, is leading the legal charge:

“In or around June 2015, Jcon entered into an agreement with Diamondwood whereby Jcon would construct a house…construction included exterior walls, masonry work, plumbing, electrical work and drywall but not finishing work.

“Jcon commenced the work on the Project on or about September 1, 2015. In October 2016, Jcon was advised that Diamondwood was being replaced as the construction manager for the Project and Jcon was asked to issue a final invoice for the remainder of its work.”

Jcon says it was asked to stay on to ensure a smooth transition, wrapped up its work in January, with everything completed but the drywall (to be completed by a new company) and sent its final bill. They’re still waiting.

So far, no response from Ezra or his counsel to any of these allegations, which are clearly all the result of an unfortunate misunderstanding. After all, unlike his hero, Der Donald Trump, who has left legions of suppliers, contractors and assorted rubes sucking the pipe, our Ezra’s a man of his word and would shurely never renege on a debt or contractual obligation. Shurely.

Out of an abundance of caution, however, both Diamondwood and Jcon applied for construction liens on Casa Levant in March.

The house hasn’t been assessed yet, but real estate experts from Frankland Capital Corporation predict that by the time the dust settles, it’ll clock in around $4-million.

Once the litigation is cleared up, Ezra and the Mrs. plan to hold an open house to thank all those Rebel supporters who donated their savings to countless Rebel fundraisers that have helped the Lügenpants family live high on the hog (shurely ‘happily ever after?!–ed.)

Believe it or don’t!

“A lesbian vampire’s quest for love”