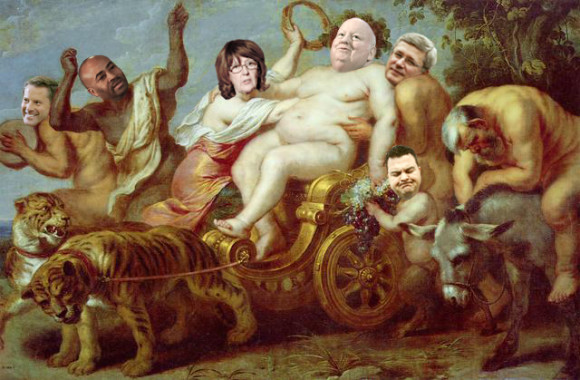 As is only fitting for what Senator Mike Duffy himself posits could be “my greatest contribution to public life,” his $7.8-Million lawsuit against the feds for failing to nail him for fraud, bribery and breach of trust, is already a well-thumbed document, a big draw for rubberneckers and kept in a place of convenience at the Ottawa courthouse.

Herewith, to save you the trip, the entire 50-page statement of claim from Duffy’s legalist du jour, the follically-gifted Lawrence Greenspon (Greenspon Brown & Associates).

The suit, as promised, is a stirring battle cry for the little guy — complete with a demand said little guy cough up $6.5 million to the good senator in general damages, $300,000 in income and benefits lost during his outrageous suspension from the Red Chamber trough, plus another $1-million in punies, with special damages and other boo-boos and boo-hoos to be particularized at trial.

“Senator Duffy’s acquittal at trial has not remedied these damages,” we are shocked and saddened to learn. “A significant stigma still remains. Senator Duffy continues to suffer emotional and physical damage to the continued and prolonged reputational damage that continues to this day, including daily mention, mockery and ridicule in media outlets nation-wide.”

The tear-jerking narrative unpacked will be familiar to watchers of Duffy’s fraud trial. Here, as on the stand, Duffy portrays himself as Honest Mike, who, despite being surrounded by Tory sleaze, was unstinting in his vigilance on behalf of Canadian taxpayers.

In the alternative, there’s Ingenuous Mike, a simple soul, unschooled in the ways of finance; a mere naif who never really understood the complexities of expense accounts (‘primary residence?! wat dat?!–ed.) let alone the dastardly schemes of the PMO.

The morning after his Red Chamber appointment was announced (Dec. 22, 2008), he rushed down to the Senate admin offices for a full briefing on every perk he was eligible for, and precisely how to milk the system.

In his early days at CBC-TV, in the seventies, Duffy’s self sacrifice knew no bounds.

He would turn up, unbidden, at CBC Ottawa studios on weekends, shoot the shit, and later bill the Corpse time-and-a-half.

He was also the master of the taxi chit, collecting blank slips from Corpse co-workers, non-existent rides to phantom destinations.

Same story when he moved to CTV in the late eighties: “There wasn’t an expense he hadn’t figured out how to nail the company for and save having to fork out a cent out of his own pocket,” recalls one ex-colleague.

At CTV, Duffy earned a base salary of some $230,000. Car and clothing allowances, plus bonuses and Rideau Club membership pushed his gross to around $300,000.

Hs new life in public service would not be without its sacrifices. As Senator Duffy he’d scoop up a base salary of just $130,400 (now $147,700), but with no limit on how many other jobs he could hold down as corporate director, after-dinner speaker, etc. (In his suit, Duffy claims speaking gigs have dried up in the wake of his legal ordeal).

The job came with an office, secretary, research budget, countless parliamentary perks and per diems, free rail and air travel (64 round trip business class tickets annually), and, bien sur, that fateful $22,000 tax-free housing allowance and per diems, only his due for continuing to live in his longtime Kanata digs.

How could it have all gone so wrong?

4 comments on “The Puffster Pleadings”