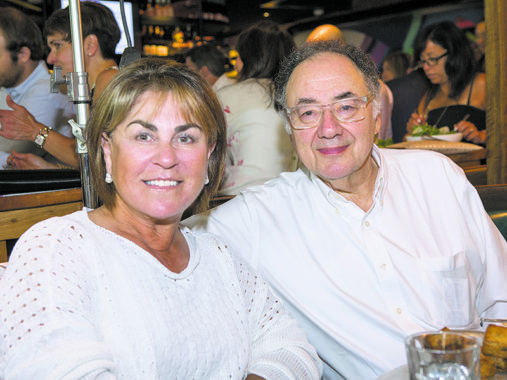 The full story obviously remains untold but, as best one can judge, Barry and Honey Sherman returned to their Old Colony Road home in north Toronto on Wednesday night, December 13.

They arrived in separate cars, apparently from a meeting with the architect hired to design the new house they planned to build in Forest Hill — a meeting to which Barry had gone directly from work.

The next morning, Sherman, a self-confessed workaholic, did not show up at the office. If anyone thought to question his absence, no one acted.

On Friday, their bodies were discovered, tied to a three-foot-high railing in their indoor swimming pool enclosure.

A week has now passed and, while the Toronto police homicide squad has taken control of the investigation, few details have been released.

Inevitably, the deaths of one of Toronto’s leading power couples has set the city abuzz, with almost everyone having an opinion on the case.

Herewith, Frank presents the leading theories and our ranking of probabilities.

MURDER/SUICIDE
According to this scenario, Sherman was concerned about the imminent discovery of some financial chicanery, possibly involving tens of millions of dollars stashed in offshore bank accounts. Rather than face personal disgrace, he chose to kill his wife and take his own life.

An alternate rationale is that Honey was planning to file for divorce, which would have stripped Barry of half his wealth, an intolerable prospect.

But there are several reasons why it’s a poor fit in the Sherman case.

First, Barry was nearly 76 years old and suffered from a chronically bad back. His wife had long battled with her weight and she tipped the Toledos at about 180 pounds. The notion that he could strangle her and then lift her even the short distance required to dangle her body from the railing in the indoor swimming pool, stretches credulity. The more so, since they were both found with their winter coats and boots still on–adding to the weight.

Second, anyone who knew Barry Sherman knew that, whatever else he may have been, he was a fighter. His business, the Apotex Group of Companies, had been essentially built on successful legal challenges to patents controlled by the world’s pharmaceutical behemoths. He didn’t back down from threats. The idea that the mere prospect of criminal charges against him, completely unproven, would cause him to take his own and his wife’s life, is preposterous.

Third, death by asphyxiation is among the more grisly forms of suicide. This was a drug industry executive with access to the entire pharmacopoeia. A simple, single pill–or two–would do the same trick painlessly and more efficiently. Absent a suicide note explaining the event–and nothing of the kind has been reported–it seems most unlikely that, even if he wanted to kill himself, he would do it by ligature neck compression.

Fourth, the Shermans were in the process of building a new home in Forest Hill and had put their Colony Road digs up for sale. They had recently welcomed a new grandchild. They were planning a family wedding later next year. They had booked tickets for the holidays in Florida. Sherman was about to be made a member of the Order of Canada–an award he prized. None of this is consistent with a man intent on murdering his wife and taking his own life.

FAMILY BROYGES
Barry Sherman had fought and won a long legal wrangle with his cousins–the children of Louis Winter, the uncle who had given him his start in the industry. The cousins, four brothers, Kerry, Jeffrey, Paul and Dana Winter, had alleged that Sherman owed them a 20 per cent stake in Apotex, based on understandings signed when he acquired their father’s pharmaceutical business, Empire Companies, in the late 1960s.

The case took a decade to wind its way through the system, much to the delight of the lawyers. Three months ago, an Ontario judge dismissed the cousins’ case as frivolous, calling it an abuse of process. Two of the cousins and the widow of a third have filed an appeal.

The premise of this theory, then, is that the vengeful cousins were so incensed by the verdict–and the likelihood that their appeal will fail– that they decided to take justice into their own hands.

But this scenario also evinces weaknesses. Because of the grievance, the cousins, inevitably, would be the first names on any list of suspect, with police poring over their contacts, cell phone and email records. The likelihood that they could get away with the crime, if they authored it, is remote.

Moreover, people familiar with the cousins say they simply lack the, er, sophistication required to execute a plot of this kind.

AN UNKNOWN UNKNOWN
Barry Sherman was a very wealthy man, by some accounts the 12th wealthiest Canadian. Besides his Apotex pharmaceutical empire, he invested widely in real estate, hedge funds, etc. According to this theory, Sherman may–in one of these side deals–have found himself in partnership with one or more unsavoury characters. If a project suddenly collapsed, perhaps he was blamed by his erstwhile partners, who then resolved to exact vengeance.

This scenario is entirely plausible, and will represent a vast minefield as investigators examine Sherman’s extensive financial dealings, and all the partners attached thereto. Committing a double murder, of course, would pose a high risk for the killer, who could assume that all of Sherman’s partnerships would eventually be probed. But police would need to establish more than mere motive, and the killer might have been willing to gamble that no evidence of actual complicity would be found.

BIG PHARMA
Barry Sherman built his substantial fortune by reverse engineering patented drugs and going to market with cheaper, generic versions. The precise numbers are unknown, but it would be fair to say that over more than four decades, Apotex siphoned tens of billions of dollars from the balance sheets of the established drug companies — the likes of Pfizer, Roche, Novartis, Sanofi and others. That was money that would have deeply impacted the bottom line, performance, stock prices and executive bonuses. To say nothing of the annual legal fees, in the many millions, these firms were forced to absorb in suits and counter-suits.

Revenge is a dish best served cold, goes this theory–and it has much to recommend it.

In this scenario, one or more aggrieved pharmaceutical executives decide that the time for payback has come. They clearly have the financial means to organize a professional hit. They have the motive, in spades. In all probability, the actual assassins would be two or three levels removed from the instigators, and never know who had ordered it. That the murder would be committed years after Sherman’s perceived offences would only help dim the likelihood of Big Pharma ever being suspected or investigated.

One can readily plot the rough contours of the actual murder. The Shermans arrive home and park in their underground garage. Although the Old Colony Road house was equipped with security systems, Sherman was said to be notoriously blasé about activating them. The killers, likely two, wait patiently, possibly in the garage or upstairs. They surprise the couple from behind, and quickly strangle them to death. That’s why they were found still wearing their winter coats and boots.

The staging of the bodies by the indoor pool would have been orchestrated to suggest murder-suicide. Investigators would eventually see through the ruse, but it would at a minimum buy the killers enough time to fly to Azerbaijan or wherever.

That scenario is plausible. If it’s also accurate, there’s a better than reasonable chance the murder will never be solved.

20 comments on “Frank Forensics: Who Killed Barry and Honey Sherman?”