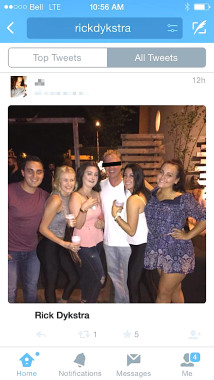 News that Tory MP Rick “Rick” Dykstra is once again in headlines over booze-related hi-jinks will come as no surprise to President Steve.

In case you missed it, the incumbent member for St. Catharines was accused this week of buying booze for underage girls at The Mansion House, a local bar in his riding.

One girl, who is now reportedly 17, but claims she was 16 at the time, tweeted: “Lol Rick Dykstra just paid for our bottle service”

Another girl, aged 18, tweeted the next day “Thanks for the bottle service last night @RickDykstra #voteDykstra #Mansion”

When the 18-year-old was asked on Twitter how much Dykstra shelled out, she answered “everything, there was at least 6 Ciroc [vodka] bottles.” The bar charges $170 for a bottle of Ciroc.

Further allegations that a Ciroc rep and Dykstra supporter offered one of the gals even more free booze to recant her tales of Rick’s all-ages hospitality were strenuously denied.