#MeTVO?! The Trials of Saint Steve 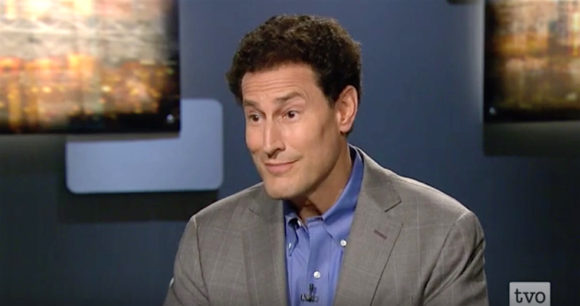 Of all the allegations of sexual misconduct against Canadian stickmen, the most preposterous so far has involved Steve Paikin.

But Steve Paikin? The Dudley Do-Right of Canadian Politics? The Guy who Put the Squeak into Sisman Scampers? Shurely shome mishtake!?

Fortunately for Steve, claims of hanky-spanky against him were easy to dismiss, since they came from loopy Sarah Thomson, the former Toronto mayoralty candidate, who alleged that during a lunch meeting with Saint Stephen in 2010, he propositioned her:

“Not five minutes into the lunch the host asked me if I would sleep with him (in exchange for airtime on his show, The Agenda.)”

Thomson’s allegations were immediately rubbished by the Toronto media, among them Globe and Minion exemplar, André Picard, and even Ezra Levant:

“Regardless of where you sit on the political spectrum, anyone who has ever met Mr. Paikin would have an easier time believing that the world is flat than buying Thomson’s allegations.” (To which one Ezra follower commented: “The earth is flat but I believe he is innocent.!!” Feb. 10, 2018.)

Paikin lashed back on FaceBook: “You’ve defamed me Sarah. I have no idea why, but you have. And I simply can’t allow that to stand.”  Paikin is said to be pondering his legal options (egged on, of course, by his image consultant chums at Navigator.)

Not so fast, Steve.

Here at Frankland Capital Corp., we’re hearing rumours about a second woman, who has reportedly told the Globe about her experience with Paikin three years ago, one that sounds a lot like Thomson’s account.

In the event, the woman, a former reporter with a Toronto daily, was invited by Paikin to join him for dinner. She’d been a semi-regular on The Agenda and here was an opportunity for Steve to discuss her future with his show.

Alas, as the evening wore on, it became clear that further invites on the show would be in direct proportion to the woman’s willingness to get a legover with Paikin.

She refused his proposition and her appearances soon dried up.

Apparently the Globe is looking for other women who may have been asked by Steve to join in Paikin Whoopee (yer fired!—ed.)

But don’t bet on any story seeing the light of day. It’s one thing for the Toronto media mob to  happily lynch Patrick Brown, but Paikin’s another matter. They’re in lockstep behind their boy, so beware anyone who might tarnish his crown.

8 comments on “#MeTVO?! The Trials of Saint Steve”