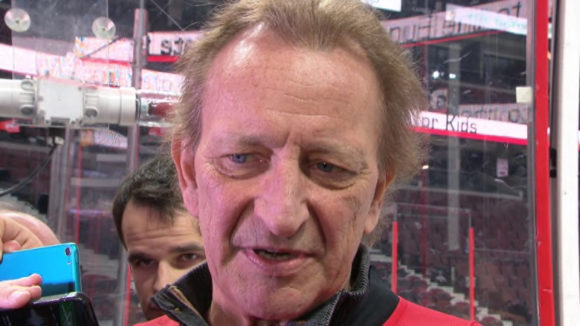 Eugene Melnyk’s cash-embarrassed Ottawa Senators announced this week that the team has completed a $135-million, six-year refinancing deal, courtesy of a syndicate of Canadian and American financial institutions.

The dough came just in time. The Sens were getting close to a debt ratio that might have sparked a sale by the league, similar to the New Jersey Devils’ near-death experience a few years ago.

These are dicey days for Gene. He’s on the verge of dealing away Erik Karlsson, his franchise player, who is heading into the final year of his six-year contract. In order to hang on to Karlsson—who is eager to flee Ottawa for any number of reasons (see below), Melnyk will have to cough up between $10-$12- million a year over eight years. That’s a price only a handful of elite teams can afford, and the Sens aren’t one of them.

Melnyk claims he’s eager to re-sign Karlsson, but, of course, he has a history of telling whoppers. Like the time he said he’d do whatever it takes “to win the damn Stanley Cup.” A couple of years later, he told TSN radio he had no intention of getting caught in a trap of “trying to buy a championship.”

He vowed to build a 10,000 seat rink in Toronto for his junior hockey team if the owners of Maple Leaf Gardens refused to sell their arena. They didn’t and Eugene sucked wind.

So why should anyone believe Melnyk now, when he claims the Sens aren’t for sale?

After all, he nearly had a deal last October with a consortium led by Guy Laliberté, billionaire owner of Cirque du Soleil.

Sadly, league commish Gary Bettman ixnayed the deal, telling Melnyk it would “devalue the franchise” if the Sens were sold at a price lower than the amount it would cost the Cirque group to purchase an expansion franchise.

Bettman didn’t want it to become a model for future team owners eager to avoid paying franchise acquisition fees, now set at $650-million. Further, in the case of a Sens sale to the Cirque, the $500-million proceeds would go to Melnyk, rather than be shared among the 30 other teams in the NHL.

Sources also say that when Melnyk couldn’t cover three payrolls during the past season, the NHL had to bail him out. Whether the league “loans” were ever reimbursed is a mystery, but it should be noted that the Sens’ recent refinancing has been earmarked “to pursue growth, serve general corporate purposes and to replace existing debt.”

At the centre of the range of arrangements and rearrangements affecting the future ownership is Daniel Alfredsson.

What he didn’t say was that he’s the point man for the Cirque investment group, which is apparently only interested in the acquisition deal if Karlsson stays with the team.

Karlsson, however, has a deep distrust of Melnyk, starting with management’s tardy response to the alleged stalking campaign against him and his wife by teammate Mike Hoffman’s girlfriend (Franks passim).

There’s also bitter recent history at play with Alfredsson. He retired early from the Sens after an acrimonious salary negotiation with Melnyk and played out his last season with Detroit Red Wings.

Melnyk had reportedly made with Alfredsson to accept a reduced salary during his halcyon years, because Melnyk had promised to generously ‘back end’ Alfie’s close-out contract leading to his retirement.

When it came time for Melnyk to buck up with the dough, he weaseled. Like a Melnyk do.