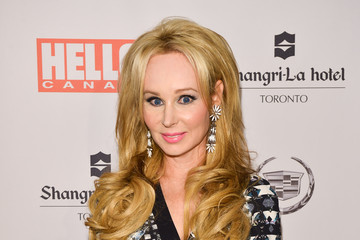 Much wailing and gnashing of teeth at Rogers Communications today as dozens of hacks were thrown over the side Maclone’s, Chatelaine, Today’s Parent and Hello! Canada.

Among the casualties, high profile names like Steve Maich, Sr. VP of Rogers publishing, and Lianne George, editor of Chatelbrain.

But Rogers found amusement in the tragedy: “Today’s changes do not impact the quality of the content…” a spokesthingy declared.

Alas, statements came there none from Suzanne Rogers, whose husband, Ed, holds $8-billion worth of shares in Rogers.

As news of the cuts leaked out in Toronto, Suzanne was across the continent in L. A., posting video of herself swanning around the Beverly Hills Hotel.

As for Ed, here’s his take:

@EdwardSRogers Apr 30
Hard to believe that the White House Correspondents’ Association and journalists managed to make President Trump the respectful soft spoken person in the room. Sarah Huckabee Sanders is a class act and should need to sit and listen to hate speech from the WHCA.