Whose Minister? Scott Brison Gets Irved 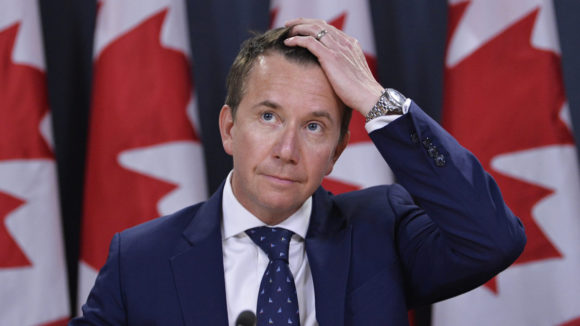 How unforgivably rude of celeb legalist Marie Henein, even in the vigorous and bare-knuckled defence of her client, drydocked Vice-Adm. Mark Norman, to paint the Hon. Scott Brison, Madame President of the Treasury Board, as some sort of stooge for Jim “Oily” Irving.

Norman, readers will recall, stands accused of leaking cabinet secrets vis-a-vis a navy supply ship contract awarded to Davie Shipbuilding by the Tories and, er, revisited by the new Liberal government. Indeed, in Nov., 2015, two days after Irving wrote a letter to four cabinet ministers, including Brison, pushing them to flip the plum to Irving Shipbuilding instead, the Liberals suspended Davie’s contract.

“Brison was behind the effort to delay and potentially terminate the Davie agreement,” pleads Henein in her bid to unearth any relevant communications between the honourable minister and Irving.

Of which there are absolutely none, Brison’s spokesliar, ex-CP hack Bruce Cheadle, told Postmedia: “Minister Brison’s only engagement with Irving Shipbuilding or its representatives during this time was being copied on the letter sent to other ministers, to which he did not respond.”

And still Marie is unmollified, citing, er, inconsistencies between Brison’s recollection of events and those of senior bureaucrats, and the minister’s supposed Irving intimacies.

“Minister Brison appears to be close to the Irvings,” quoth Henein. “He has frequently been lobbied by James Irving on behalf of the company.”

And what of it? The Treasury Board suprema, in his role as guardian of the privy purse, consults with key stakeholders every day. And when cabinet minister Dominic LeBlanc was deemed by the ethic commish too far up the Irvings’ asses to be trusted alone with them, someone had to step in as Jim’s interlocutor/comfort bear.

3 comments on “Whose Minister? Scott Brison Gets Irved”