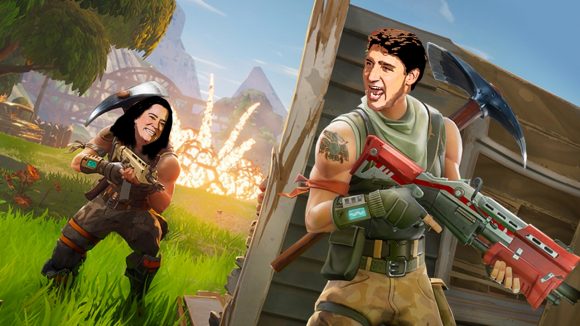 Justin Trudeau was at least prompt with the sorries for his thank-you-for-your-donation douchery at last week’s Laurier Club juicer in Toronto, wherein the PM taunted a Grassy Narrows protester as she was frogmarched from the building.

It was a regrettable outburst from the 47-year-old basic adult (President Steve was 46 when he was elected prime minister.) Whence the poor sportsmanship, the failure of empathy and impulse control?

Perhaps it can simply be chalked up to so many weeks of being served LavScam shit salads, but Frank fervently hopes the ugly slip was in no way related to all the screen time the PM’s been racking up with his favourite video game.

Prime Minister Baublehead, whenever he can get a little Just-Watch-Me time, likes to unwind playing Fortnite, the popular multiplayer online fragfest.

The addictive first-person shooter has been flagged as a clubhouse performance-drainer by, among others, the Vancouver Canucks and Toronto Blue Jays, while the usual worts worry it’s turning our yout’ into antisocial killbots.

Shurely nobody would begrudge a Canadian prime minister a little something, be it whiskey, seances or Nyquil, to take the Rt. Hon. edge off.

Jean Crouton golfed his way through three majorities, the ’95 Referendum and 9/11. The shambling old clock-puncher often remarked that being PM wasn’t as hard as it looked, and it certainly didn’t cut down in the slightest the number of hours he logged on the links — two or three rounds a week, minimum. Not since Dwight Eisenhower (and until Der Donald) had a G7 nation had such a floater in the top job.

When the local brown bears started dropping gargantuan steamers on the immaculately groomed tees of his beloved Royal Ottawa Golf Club, it didn’t lake long for Crouton’s RCMP security detail to get animal control on the horn to start rounding up the furry perps.

For Trudeau the Younger, Gen-X latchkey kid of 24 Sussex, video games have been a lifelong passion. He even, in 2016, tried designing one, a buggy and unimaginative effort, IGN News pronounced: “[T]he game is derivative of Pong, Brickbreaker and Air Hockey, and suffers from some unusual clipping issues and unrealistic physics. If I had to score it now, 3/10. Sorry, Big J.”

While the PM’s security sluggos fret over any risks posed by his online wassailing, the digital enticements of Fortnite for the embattled primus inter pares are clear: a quick, convenient hit of adrenaline whenever his schedule permits, a chance to blow off some steam blasting away at trash-talking incels.

Bonus points: Since publisher Epic Games disabled friendly fire in the game, as long as the PM is safely ensconced in his virtual reality, there is zero chance of him getting repeatedly, er, shot in the back by members of his own team.

One comment on “Baublehead in the Game: Justin’s Fortnite Follies”