Only, in Germany, it was known as the Full Wankendorf, and even Hitler had his ball done once a month
What has happened to the noble concept of human rights? The concept was most firmly implanted into modern consciousness after the unspeakable cruelties and mass murders of the Nazi regime were fully documented and published to the world. That was the horrid prompt for The Universal Declaration of Human Rights in 1948…. Where is this noble idea now, particularly in the comfortable and secure West, in this era of high progressivism? In British Columbia, there is at the present moment 16 “human rights” complaints, launched by a single person who asserts the status of “trans woman” against (mainly immigrant) female cosmeticians who—from religious sensibilities, reasons of safety, or simple personal preference—refused that person’s demand for a Brazilian waxing of their male genitals.
—Rex Murphy, National Post, July 19, 2019.

Seriously?
I seriously wonder—seriously—if this story somehow made it to the ears of an incarcerated and tortured North Korean, how he would respond to the invocation of human rights law to cover such a matter? How could he, being beaten, doing forced labour on starvation rations, locked in for life, possibly with every family relation imprisoned too, intellectually or morally digest that in some way the case(s) in B.C. were being adjudicated under the same rubric of human rights as his situation…?
—Ibid.

Plucky pundit takes stand against vile, obnoxious and blasphemous New York-born charlatan who can’t refrain from indulging in unfathomable distortions and recklessness on Twitter
Ocasio-Cortez, the Twitter queen of the Democratic party…has been on a rampage in her opposition to Donald Trump, and most particularly in her opposition to his attempted responses to the crisis at the U.S. southern border…. When she abandoned her position there was no crisis at all, she jumped to the absolute opposite contention, that it was in fact a super crisis, and that President Trump’s response was nothing less than a totalitarian horror, the setting up of “concentration camps” (migrant detainment centres)….. But enough. To ask for logic or fidelity of thought from someone who embraces such rhetorical savagery is futile. The comparison is absolutely odious. And it is a pure toss-up which is worse: if she actually believes what she says, her mind is a vacancy; if she knows it is false, she is a vile and obnoxious charlatan.
—T. Rex Murphy, National Post, July 5, 2019.

Yep, just squint a little bit, and it’s a fucken paradise
Responding to a recent report lamenting the current plight of Palestinians in the Gaza Strip, Barbara Kay points to some relevant facts about the radically improved conditions there under Israeli rule, a few effects of which endured even following Israel’s 2005 withdrawal…. …Gaza’s gross national income per capita (GNI) is $1,760, which seems nugatory to us but isn’t for the region….
—“How, by Every Metric, Israel’s Occupation of Gaza Improved Gazans’ Quality of Life,” mosaicmagazine.com, July 15, 2019.

That’s why me and missus, we call ’em Freedom Farts
Last Friday, the Weather Network sent out a tweet that warned Canadians… “If you really want to help save the planet, you could seriously consider limiting the amount of beef you eat.” This is one of those silly notions that the climate-catastrophe cult has perpetuated for years. First it was cow farts produced so much methane that cattle production was raising the amount of heat-trapping greenhouse gas in the atmosphere…, More recently, [it] has largely been that it takes too much land to raise, which makes cattle an inefficient food source. It takes too much grass to produce a pound of protein; eat lentils instead. Even if this were true (and it’s not), when I tune into the Weather Network to see whether I should take an umbrella or maybe develop gills to deal with our wet, wet summer, I don’t want to be bombarded by one-sided, politicized information. Of course, I’m biased, too — doubly biased. I’m skeptical about climate alarmism AND I love beef. If I had to choose one food to eat for the rest of my life, it would be Alberta beef.
—Lorne “Two-gun” Gunter, Toronto Sun, July 23, 2019.

A 2017 landmark study found that the top three meat firms—JBS, Cargill and Tyson—emitted more greenhouse gases in 2016 than all of France…. A study last year showed, for example, that if all Americans substituted beans for beef, the country would be close to meeting the greenhouse gas goals agreed by Barack Obama.
—Reported by Bibi van der Zee, The Guardian, May 7, 2018.

Well. all the more reason not to get me hot under the collar then
Yeah, yeah, yeah. It’s summer. It gets hot (most years) even this far north. If we all promise to drink lots of water, avoid strenuous activities during peak daylight hours and not leave children or pets in parked cars, can we please be spared the anxiety-filled public-service announcements that sound as if it has never been hot before?
—“Two-gun” Gunter, op. cit.

Last Month Was the Hottest June on Earth Ever Recorded
—livescience.com, July 18, 2019

It’s kinda like rainy weather, which persists as long as water keeps falling from the sky
A “heat dome” isn’t a defined meteorological term, said Peter Kimball, a warning preparedness meteorologist with the Meteorological Service of Canada…. “It’s basically hot weather,” he said. The effect occurs when there is little or no variation in the temperature and the heat becomes trapped without any cooler air moving in, Kimball said, which is why the high temperatures can last over days.
— Nicole Riva, cbc.ca, July 19, 2019.

Buy our bullshit, or we’ll shoot the survivors
A while back I spent a day hanging out in the chuckwagon barns at the Calgary Stampede…. As the driver and crew of each team started harnessing each of their four horses that would pull their chuckwagon…, a racket ensued—horses started kicking their stall walls, others stomped and some just moped and turned their backs on their owners. “What startled the horses?” I asked. “Nothing,” I was told. “The ones that don’t get to race are just angry, and they’re letting us know.” In short, the racehorses that didn’t get to run were throwing a tantrum…. [S]everal years ago…the GMC Rangeland Derby was cancelled one evening because of…torrential rainstorms. As race time approached, it sounded like a thunder-and-lightning storm had broken out in the stables…. The horses realized that they would not get to race that night and they started stomping and kicking the walls in protest. [E]very time an animal dies at the Calgary Stampede calls to ban its rodeo and chuckwagon races kick in as swiftly and violently as a bucking bronco…. Those comments have ramped up now that six horses died during the course of the Stampede’s Rangeland Derby…. “These horses, most of them, are destined for the meat plant because there’s nowhere else for these animals to go….” explained [chuckwagon jockey Kent] Bensmiller…. J.P. Veitch, a stockbroker and former bull rider, says while he can’t prove it, he’s pretty sure that rodeo bulls love what they do. “I would suggest they are beyond happy to buck rather than appear on a platter or being a steer,” said Veitch, who is married to Rona Ambrose….
—Licia Corbella, Calgary Herald, July 15, 2019.

Why you’ve never seen a Commie drink a glass of Calgary water
When our twin sons were born in 1997, the City of Calgary had been adding one part per million of fluoride to our drinking water, which began in 1991. Back then, health officials declared that the “science was settled” and I, like many other Calgarians, stupidly and unthinkingly believed their earnest declarations that adding fluoride to our water supply was “a safe and effective way” to battle tooth decay. Two years later, those same medical experts let out a collective scientific oops. It was a quiet oops but one nonetheless, and naturally none of those arrogant medical experts was held accountable for their mistake. Calgary decided to decrease the amount of fluoride in our water to 0.7 ppm—a 30 per cent drop. Clearly, the science from just two years earlier wasn’t so settled after all…. That should give all proponents of mass fluoridation pause…. Oh, and as for that settled science, numerous reports published since Calgary removed fluoride from our water indicates that too much fluoride is linked to lower IQs in children exposed in utero, cognitive issues, kidney problems, endocrine failure, and the list goes on.
—Licia Corbella, Calgary Herald, July 17, 2019.

“Have you ever seen a Commie drink a glass of water… Do you realize that fluoridation is the most monstrously conceived and dangerous Communist plot we have ever had to face…? You know when fluoridation first began?…1946…. How does that coincide with your post-war Commie conspiracy, huh?”
—Brig. Gen. Jack D. Ripper, United States Air Force, 1964. 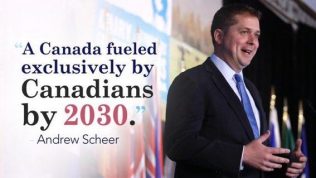 Next thing you know they’ll be trying to suggest there’s something wrong with eating TimBits
Conservative Leader Andrew Scheer is promising another review of Canada’s recently updated Food Guide should the Tories come to power this fall, saying the latest guide is the result of a flawed and biased process. Scheer made the comment at the Dairy Farmers of Canada’s annual general meeting in Saskatoon…. “The process was flawed,” Scheer said of the new guide. “Complete lack of consultation. Seems to be ideologically driven by people who have a philosophical perspective and a bias against certain types of healthy food products….” Scheer added his party wants the guide to “actually reflect what we know, what the science tells us….” He added: “The idea that these types of products that we’ve been drinking as human beings and eating as human beings for millennia — that now all of a sudden they’re unhealthy — it’s ridiculous.”
—Reported by Guy Quenneville, cbc.ca, July 17, 2019.

CBC!? But you said that’s fake news!
China is cranky these days, and for good reason: For the first time in a generation, someone powerful is holding them to account— Donald Trump…. So China’s on the back foot. Except with Canada. In addition to the hostages, China has slapped massive trade sanctions on Canada…. Oh, and look at this: Dr. Xiangguo Qiu, her husband Keding Cheng and an unknown number of her students from China were removed from Canada’s only level-4 lab on July 5, CBC News has learned.
—Cmdr. Ezra Lügenpants, therebel.media, July 15, 2019.

Er, except, of course, when I can use them to advance my own fevered idiocy…
A Level 4 virology facility is a lab equipped to work with the most serious and deadly human and animal diseases. That makes the Arlington Street lab one of only a handful in North America capable of handling pathogens requiring the highest level of containment, such as Ebola…. So we just have a whole Chinese unit in our country, they don’t even speak English, and they’re just working in our confidential research facilities? My theory is that they’re getting information for the People’s Liberation Army on an ebola weapon.
—Ibid.