Godspeed, Sir! Three for the Curb: “I cannot think of a better person than you, Admiral Art McDonald, to succeed to the functions of General Jonathan Vance.” 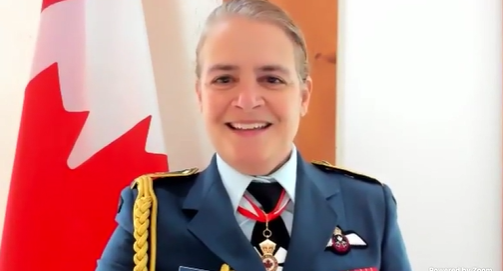 It is my honour and privilege to be a part of this time-honoured ceremony, the passing of the command in the Canadian Armed Forces. I am delighted to share this very special day with you, and with two remarkable men and their families…

As Commander-in-Chief, I have the pleasure of meeting members of the Canadian Forces and honouring their dedication to our country. I have seen firsthand how hard our servicemen and servicewomen work, both abroad and at home, to defend the principles of peace, freedom and democracy.

I am particularly proud of the work that was done in this regard by the longest serving Chief of the Defence Staff in the history of our country, General Jonathan Vance. He is the son of the late Lieutenant General Jack Vance, and a proud soldier of the Royals, the Royal Canadian Regiment whose battle honours date back to the war of 1812… 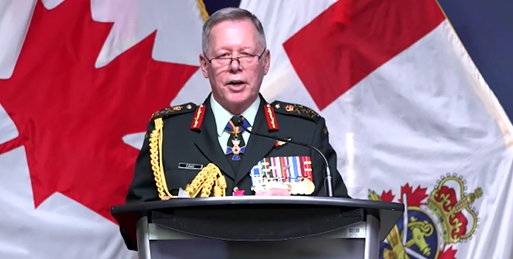 With poise and humility, General Vance provided judicious advice, tackled tough issues – including needed changes within the military to move past beyond unacceptable attitudes – and led the Canadian Forces to face the new demands of today’s warfare environment, a world in which invisible enemies, whether domestic, foreign or planetary, whether human, biological or binary, must be taken seriously.

General Vance, like so many others, accomplished all of his duties while balancing military and family life. He was blessed with the support of his wife, Ms. Kerry Vance, and their children Olivia, Nora, Max, Julia and Mara.

Kerry: while you were taking care of a professional career, young adults and a soldier, you also shared your deep concerns and compassion for our military veterans and families at every assignment … at every occasion. Military life can be incredibly hard on people, but you are a living example of how it can be done efficiently, with grace and flair. Thank you, Madam.

Just so you know, General Vance has not yet shared with me where he will be moving next – I hope he does, as I hope we stay in touch – but I am absolutely convinced that any institution or body he will associate with will be immeasurably fortunate to count him in.

General Vance, a grateful nation wishes you the best wherever your next endeavours take you. All the best to you and to your family.

And so now, the torch is being passed onto the 20th Chief of the Defence Staff, Admiral Art McDonald.
Before I sing your praises, Sir, I would like to point out that you are not the first extraordinary son of Nova Scotia called Art McDonald. There is in fact another Bluenoser called Art McDonald, who won the 2015 Nobel Prize in Physics for solving the solar neutrino mass question… 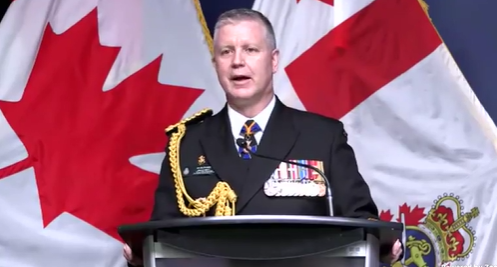 As the command passes on this special day, I cannot think of a better person than you, Admiral Art McDonald, to succeed to the functions of General Jonathan Vance, to lead our Forces forward and to accomplish Canada’s mission at home and around the world.

I put my trust in you and I know you will do an outstanding job.

And, if you allow me some RCAF parlance – Godspeed, Sir! (that’s enough brass balls!!—ed.)

3 comments on “Godspeed, Sir! Three for the Curb: “I cannot think of a better person than you, Admiral Art McDonald, to succeed to the functions of General Jonathan Vance.””