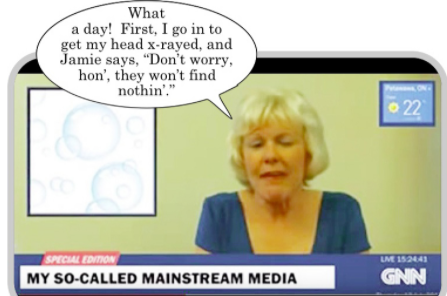 This time, the libtard snowflakes melted down over Cheryl’s online palaver with Kampus Konservatives at Queen’s U. Her “message” was rife with warnings about “cultural Marxists” (oy veh!), PM Baublehead’s plot to infect us all with the ‘rona to hasten the Great Reset, and of course, them drug-dealing, pedophile Liberals:

“They want all illicit drugs to be legal. They want anything goes in every aspect of life. They want to normalize sexual activity with children,” Gallant raved.

Same Cheryl, different decade. Conservative leader Erin O’Toolebag gamely assumed the traditional non-position (“Canadians have other priorities and so do I,”) so familiar to a generation of predecessors (Stockboy Day, President Steve, Rona Ambrose, Andrew Scheer) whom the evangelical loonyspoon has outdumbed, outcrazied and outlasted.

Whether opining on shiftless Atlantic layabouts waiting for nanny-state Coast Guard to pull them out of the deeps, telling PTSD sufferers in the Canadian Forces that any stigma attached to their condition is all in their scrambled little heads, equating abortion with jihadi beheadings or Liberals with Nazis, Cheryl has always been a voice of sanity and compassion.

Herewith, a reading from the Gospel of Cheryl, and a reminder that for 20 frickin’ years now, the most dreaded words in any committee room have been: “We’ll go now to Ms. Gallant:”

Madam Chair, I had my hand up the whole time. Speaking of convention, because the chair is often doing other things, it’s up to the clerk to be sitting there so that the opposition gets fair play. It is unconventional to have the clerk over there, where I’m out of eyeshot. I had my arm up all that time…What we’re trying to do here is ensure that the women – and men – of the Canadian Armed Forces have the confidence that the system that has been put in place to ensure that they are given fairness when they bring forth, uh, complaints of this nature [sexual misconduct] is going to be handled in the proper way.
— Defence committee, Feb. 9.

When the Minister of Canadian Heritage started talking about hate speech and fake news, it pandered to the less tolerant, the alt-left crowd. Their agenda is to silence the diversity in the voices in Canada. Canadians have every reason to be concerned. The Prime Minister goes to the United Nations and says one thing, and then denies his own words when questioned about his version of the great reset he has planned for Canada…Insofar as wanting to fund CBC more, it is already rebroadcasting CNN and not doing anything with the money it has right now. It is just copying news from the States. We might as well be watching those other stations. CBC is not putting any original content on.
— House of Commons, Dec. 11, 2020.

Gallant: Statistics have been kept since 1995, yet over the years—at least 20 years—there has been an outright denial of statistics being kept, until very recently. Would you actually produce the documentation substantiating these statistics so that we can go back and see how we’re comparing now as opposed to then?
Dr. Elizabeth Rolland-Harris, Public Health Agency of Canada: I was at DND from 2006 onwards. I can’t speak to prior to 2006, but I can tell you that those statistics were being tabulated, analyzed and published since 2006 at the very least. The reports were at the time being published on the National Defence website.
— Defence committee, Nov. 30, 2020.

Millions of responsible, law-abiding firearms owners do not understand why the Liberal Party hates rural people in general and anyone who owns a firearm in particular. We have done nothing wrong, unlike the scandal-ridden Liberals.
To all the hunters out there, enjoy this year’s hunt and may it not be the last.
— House of Commons, Oct. 20, 2020.

Unlike dressing up in blackface or groping a female reporter, this time the Prime Minister is not going to get away with hiding on some fantasy island or avoiding scrutiny by shutting down Parliament. We are going to ensure that the entire scandal, piece by piece, as deep and as wide as it might be, is uncovered for Canadians to know.
— House of Commons, July 20, 2020.

Madam Chair, how do we know with an intern? Let’s say they’re a foreign student, and maybe we’re talking about Huawei and defence systems, and we’ve got a student at an in-camera meeting who’s from another country and committed to that communist party country. I think it’s untenable that we risk having any intern at an in-camera meeting
— Defence committee, Feb. 24, 2020.

We have also seen the appearance of disrespect for women right here in the Chamber. Some members might remember “elbowgate”, an incident when the Prime Minister elbowed a member of the NDP. There was also the groping incident. The Prime Minister said the woman involved remembered it differently and that he did not know that she was national media.
— House of Commons, Feb. 4, 2020.

Mr. Speaker, I paused for a moment to focus on the Prime Minister’s chief of staff reference to lining up some amateur journalists to write up some fake news, such as the Ben Chin-Gerald Butts duo that had lined up [Toronto Star tech reporter] Tyler Hamilton during the Ontario Green Energy Act. I am saying that what happened then is happening now.
A prominent CBC reporter not only recently confirmed being used to distribute the fake news stories, he followed up with a story about another global warming report, which is being used by the Liberal Party to justify its new carbon tax, while it desperately gropes to change the political channel to the weather channel.
–House of Commons, April 10, 2019.

Climate has been changing since the begin—creation of our planet. This radical extremism policy of the government must stop. Carbon taxes will not reduce global carbon emissions. They only make matters worse. So what shall we do. It’s time to stop and put things into perspective. We should begin with the assertion that carbon dioxide is not a harmful chemical in the traditional sense of the word…is actually essential for all life on earth…plants to live. The obsession with carbon emissions is allowing many real polluters to fly under the radar…because carbon dioxide is so ardently being demonized.
— House of Commons, May 1, 2018.