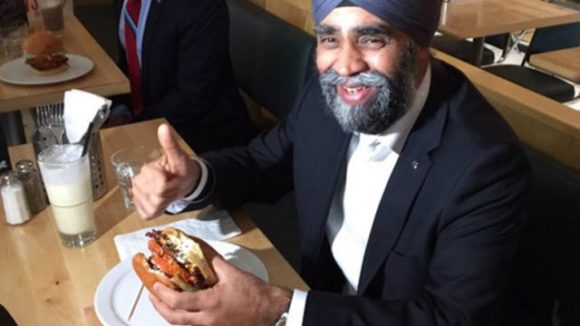 My heart goes out to Defence Minister Die Harjit Sajjan, whose toot to India was marred by outrageous accusations from the Punjab’s loopy Chief Minister Amarinder Singh that Canada’s Badass-General is with the terrorists, a Khalistan separatist of all things, simpatico with the brutes who blew up Air India 182 and whacked Indira Ghandi.

“Sajjan is welcome to attend conferences and meets [sic] and even visit the Golden Temple, but I will personally not entertain the Canadian minister as I have concrete information about his being a Khalistani sympathiser, just as his father Kundan Sajjan, a board member of the World Sikh Organization, was,” quoth Singh.

Not this shit again! Have we learned nothing from the Chrystianacht Freeland affair?

Cue the ancient highlight reel of the separatist WSO’s founding convention in 1984, and Ajaib Singh Bagri‘s ambitious declaration to the membership that, “until we kill 50,000 Hindus, we will not rest!”

Bagri, co-founder of Babbar Khalsa, designated a terrorist organization in Canada, would later be tried (and acquitted, bien sur) in the Air India bombing. WSO worthies have ever since been forced to strenuously deny that, despite their pronounced nostalgia for various assassins, bombers and other martyrs to the cause, they would countenance violence in any form whatsoever, amen.

Poor Harj, readers may recall, endured similar smear-by-association during his grimy 2014 turban-twister of a nomination in Vancouver South, which he won only after the frontrunner, moderate Sikh Barj Dhahan, mysteriously dropped out of contention.

Dhahan’s apoplectic supporters were left theatrically tearing up their membership cards and pointing to Prem Vinning (Franks passim), past president of the, er, WSO, as orchestrator of the coup, aided by his usual busloads of fundamentalists.

Prem, whose meeting-stacking prowess helped secure the Liberal leadership for Jean Crouton in 1990, has awaited his rightful appointment to the Senate ever since. Alas, encouragement comes there none.

The Trudeau meritocracy has, however, at least arrived for Prem’s sons. Gurpreet Vinning, 31, is a policy advisor and special assistant (western and northern Canada) to Infrastructure Minister Amarjeet Sohi, while little brother Manjeet, 29, is a senior special fartcatcher to…Harjit Sajjan!

Prem meanwhile continues his important participation in the political process, shaking loose federal pork for the City of Surrey and other discerning clients of his company, Concise Consulting.

Only the most racist conspiracy theorist could possibly believe any of these innocent details makes our Harj, who has denied he’s a member of the WSO, in any way beholden to extremist elements in the Sikh community.

By such feeble logic, one might as well declare the decorated war hero a stooge of that other shadowy international organization, the Red Cross. After all, he last year hired the organization’s government relations she-weasel, Isabelle Daoust, as a senior policy advisor. She promptly broke in her expense account with a $14,000 junket to Singapore for the Shangri-La Dialogue security conference.

Once Isabelle jumped ship, the Red Cross hired the best consultant lobbyist they knew…Earnscliffe’s Paul Moen! In this era of doing politics differently, of course, Paulie is not registered to lobby the wife’s minister. And why would he have to?