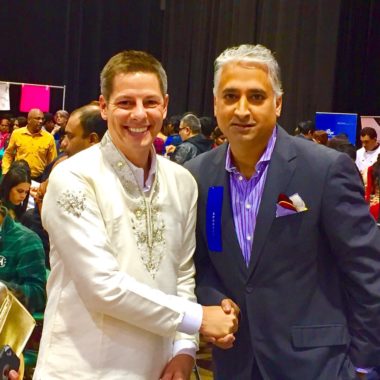 To hear His Worship tell it, he was just tucking into his gulab jamun at a Diwali beanfest, Oct. 14, when the Hindu hustler, these days a lobbyist for the city’s taxi companies, buttonholed him for a grip’n’grin.

“I was pleased to join him for a picture, but there were comments he whispered to me afterwards which I perceived as a threat,” Bowman told city hall hacks after a prickly meeting on taxi regs. “To be fair, it’s unclear to me whether or not it was a physical or just a political threat but certainly unwelcomed.” 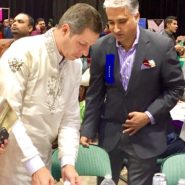 Bowman (l) and Chopra (r) get ready to mumble.

The Winnipeg Taxi Coalition, much-exercised as Uber rolls into (and over) their racket, has upped their reptile ratio at city hall, hiring the tripartisan titty-twisting team of Liberal Ajay, provincial NDP leadership loser Steve Ashton and Scott McFadyen — brother of Hugh, the ex-Manitoba PC leader, now lobbyist for, er, Uber.

Chopra, these days sporting a Just For Men frosted shellac worthy of Ben Mulroney, denies saying anything that merited a mayoral trouser-wetting.

“As I was leaving I whispered that I will work as hard and as effectively as possible to fight for the community and for the taxi drivers to ensure fairness, equity, and safety,” quoth Ajay in an emailed statement. “I have no idea how he would have construed any part of the discussion as a threat. My interpretation was that it was a good dialogue. The mayor’s interpretation is perplexing to me as we were surrounded by friendly festival goers.”

Indeed, how our Ajay could ever trigger fears for one’s personal safety in front of multiple witnesses remains a mystery to Frank, previous misunderstandings notwithstanding. 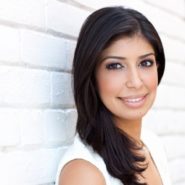 Partygoers at Audiobooks.com supremo Sanjay Singhal‘s fiftieth birthday pissup at The One Eighty were warming to the ‘Studio 54′ theme with copious nose-powdering in the lavatories when Pathak, spotting his old wingman Ajay deep in colloquy with the enchanting Pooj’, charged straight for them, fair snorting with rage: “Stay away from my wife!” 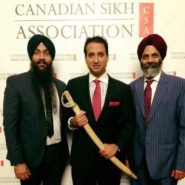 A round of pushy-pushy ensued, and Pathak slapped Chopra, who lamped him one before the Poojalists were separated and packed off home.

Shades of the Liberal Party’s 2001 shindig in Ottawa, when Chopra squared off with Chris “Son of Slaphead” Collenette. The moist and garrulous ministerial minions, adversaries in the party’s Martin-Crouton fratricide, got into a loud and escalating argle-bargle. Collenette threw a rye and Coke, Chopra a right, and both were 86ed by security.

As Winnipeg thrashes out its ground rules for the Age of Uber, Frank looks forward to more productive dialogue between Mayor Bowman and the humble tribune of Winnipeg’s hard-workin’ cabbies. Can’t fight city hall? Sez who? Two for flinching, Your Worship!